Kia has unveiled the striking new Proceed Concept, alongside a series of new production models at the 2017 Frankfurt International Motor Show.
The Proceed Concept presents a bold vision for a potential member of the next-generation cee’d family. The concept has been revealed alongside the new Kia Stonic, which makes its public premiere in Frankfurt. The Picanto X-Line and upgraded Sorento are also revealed for the first time, before going on sale globally later in the year.

The new Kia Proceed Concept has been created by Kia’s European design centre in Frankfurt, and hints at the design of the next-generation cee’d model family. 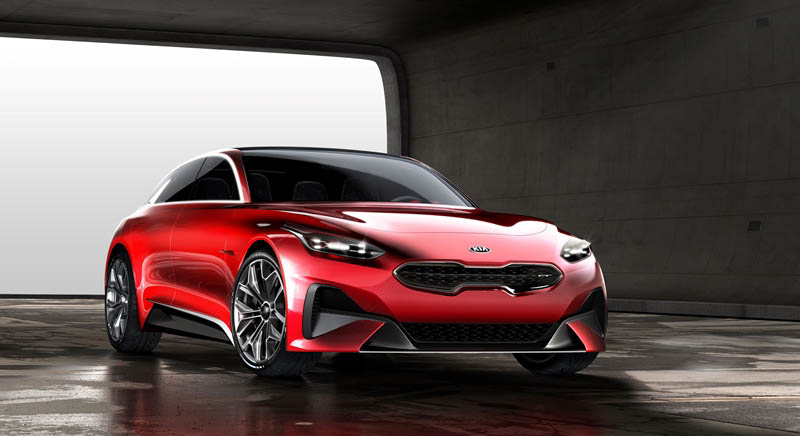 Unveiled for the first time today, the concept presents a new body type for Kia. The extended hot hatch sports a low roofline, muscular proportions and compact footprint. The concept features a striking ‘Sharkblade’ in the bodywork which reinforces the lack of B-pillars, while lateral strakes exaggerate the Proceed Concept’s waistline and lend an air of muscularity to the rear of the car. The concept is finished in bespoke ‘Lava Red’ paintwork, created by combining multiple hand-applied layers of black, chrome-effect silver, and red-tinted lacquer.

Inside, the cabin is inspired by the world of bespoke tailoring and haute couture. Four split-back seats are wrapped in rippled black fabric, tailored by hand, with hand-painted satin fabric lining the doors and flowing into the footwells. The Proceed Concept’s dashboard controls are finished in highly tactile knurled aluminium.
Gregory Guillaume, Chief Designer Europe for Kia Motors, commented: “With many European drivers now seeking performance alternatives to the three-door hot hatch, we began thinking about a different halo model for the cee’d family. The Proceed Concept represents a bold new vision of how the vibrant soul of the pro_cee’d could be reincarnated and revitalised for a new generation of performance-oriented drivers.”

Shown publicly for the first time in Frankfurt, the Stonic is an important conquest model into Europe’s newest and fastest-growing vehicle segment. The new Stonic is an eye-catching and confident compact crossover and the most customisable Kia ever.

One of the brand’s most striking designs to date, the Stonic is immediately recognisable as a Kia thanks to its signature ‘tiger-nose’ grille. A ‘Targa’-style roof provides a natural canvas for a two-tone paint finish, and the car is available in up to 20 two-tone colour combinations, with a choice of five distinctive colours for the roof.

The cabin offers buyers as much potential for customisation as the exterior, with a range of vivid colour packs for customers to choose from. Designed with ergonomics at its heart, the Stonic also provides a range of technologies to improve comfort, convenience, connectivity and safety. Smart packaging maximises interior space for all occupants, allowing it to offer class-leading shoulder room and generous leg- and head-room.

The car is powered by a range of lightweight petrol and diesel engines, each paired with a manual transmission, maximising driver engagement and efficiency. The car’s European-tuned steering and suspension are designed to offer an exciting drive, with immediate handling responses and a stable ride.

The all-new Stonic goes on sale across Europe during Q3 2017.

The Stonic is joined on Kia’s stand by the all-new Picanto X-Line, which makes its public debut in Frankfurt. The crossover-inspired Picanto X-Line further broadens the appeal of Kia’s smallest car, combining its best qualities with a new look which draws inspiration from Kia’s popular crossover and SUV model lines. The rugged design is highlighted by contrasting colour packs and 15 mm raised ground clearance. The result is a more confident, go-anywhere appearance which provides the driver with a clearer view of the road ahead.

The Picanto X-Line is powered by Kia’s 100 ps 1.0-litre T-GDI (turbocharged gasoline direct injection) engine, making it the most powerful Picanto ever. The engine will also be fitted to the GT-Line model when the all-new X-Line goes on-sale across Europe during Q4 2017.

The new Kia Sorento, the company’s seven-seat flagship SUV, is revealed for the first time ahead of global sales starting during Q4.

The Sorento has underpinned the company’s continued sales success in Europe and around the world in recent years. The new Sorento is available with the company’s new eight-speed automatic transmission, providing a slick-shifting, decisive drive, while also reducing emissions. Other improvements include a range of new safety, comfort and convenience upgrades, such as Kia’s new 8.0-inch touchscreen infotainment system, and a series of driver assistive safety technologies.
The upgraded Sorento is also available for the first time in new ‘GT-Line’ specification, offering buyers the sporty looks and dynamics of Kia’s higher-performance GT models, while retaining the Sorento’s versatility, performance and comfort.

The Kia Stinger will be displayed at the Frankfurt Motor Show in European specification, its final motor show appearance in Europe before going on sale during Q4. The Stinger will be available in Europe with a choice of three engines: a 2.0-litre turbocharged gasoline engine, a 2.2-litre diesel engine and a 3.3-litre twin-turbo V6 gasoline engine producing 370 ps. A consummate gran turismo, the Stinger has been designed in Europe and is the most powerful, fastest-accelerating Kia production car ever built.