Kia can do no wrong these days. In a global market that is recording +4.2 per cent increase in demand for new cars, Kia leads the way with +18.6 per cent followed by nearest rival Volkswagen on +14.4 percent and Hyundai with +10.8 per cent growth in demand for their cars.

The highly regarded Global Insight has forecasted a further decline in the European car market of about 10 per cent this year. Their index for the first half of 2012 shows that Kia are the big winners too with +26.8 per cent growth, with their nearest rivals Hyundai and Chevrolet in joint second place at +12.8 per cent growth. Skoda comes next with +4.7 per cent growth recorded. And all this is happening while many major players are showing negative growth. Very impressive indeed 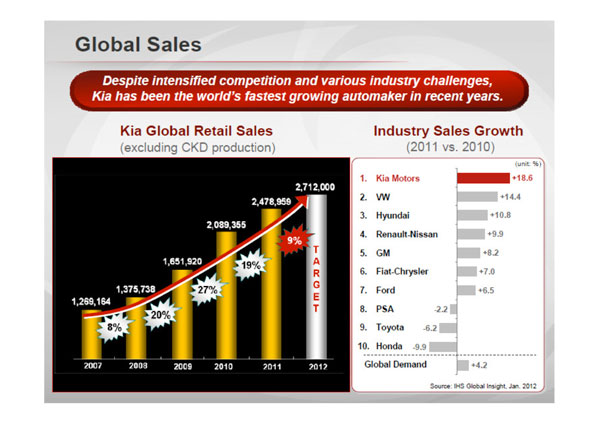 Here in a market that is down 12 per cent, sister brand Hyundai leads the way with a whopping +30 per cent growth, but Kia comes a clear second with +17.8 per cent. These are followed by Honda, Audi and Skoda.

In terms of brand recognition, Kia has made a major jump forward, entering the Top 100 Global Brands at number 87. This is linked to a massive 50 per cent increase in value of the brand – a truly remarkable performance.

Kia Motors Ireland has achieved a 4 per cent market share here in Ireland for the first time. Their MD James Brooks reveals that this was their target by 2012. He pointed out that their retail share is actually higher at 5 per cent. He noted the new Sportage SUV with sales of +80 per cent as particularly worthy of mention.

With a massive transformation of their product range and three more new models (stunning Pro cee’d hot hatch, Carens t-seater MPV and Sorento SUV arriving next February and March, it looks like the Kia star is set to shine even more brightly. And of course, the Kia Rio is the current holder of the Continental Irish car of the Year title.

Check out my review (below) of the new Kia cee’d Sportswagon, which I drove at the weekend. It goes on sale next Thursday. 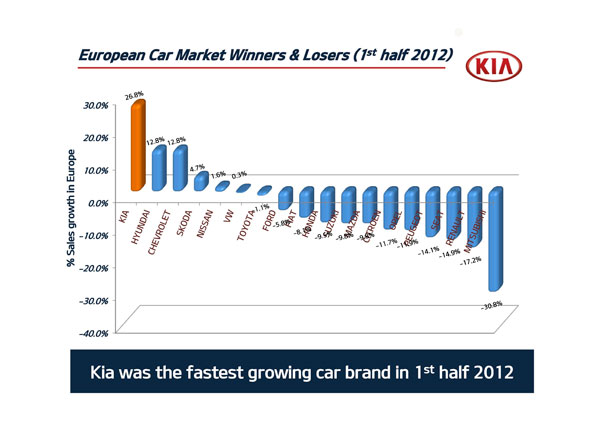 The new Kia cee’d Sportswagon goes on sale in Ireland from next Thursday (Oct.11th.) with a competitive diesel model entry price of €21,795. It has been a best selling estate in Ireland for the last four years and on the evidence of a test drive I had at the weekend, it looks set to stay out in front, despite new rivals on the horizon.

The new second-generation five-door hatchback which in itself is more sophisticated, more refined, more efficient, and delivers a more engaging driving experience than its predecessor is surpassed by the new Sportswagon.

The engines, transmissions and running gear are similar to the cee’d five-door hatchback, but the Sportswagon offers increased passenger and cargo space. This practicality makes it even more attractive.

And with a new roof, side panels, rear doors and tailgate, the Sportswagon is longer and taller but a little narrower than the successful previous model. It boast one of the longest wheelbases in the C-segment, and it too is common to all cee’d variants. When open, the new tailgate rises higher to allow easy, unimpeded access to the cargo bay.

Cargo capacity at 528 litres is 39% greater than the cee’d five-door hatchback, with the rear seats upright and 25% greater with the rear seats folded and the cargo bay loaded to the roof. The higher roofline ensures that headroom is increased, by 21 mm (front) and by 2 mm (rear).
The model line for new cee’d in Ireland will comprise of two trim and engine choices . Trim levels comprise entry level TX and EX. Both trims will be will be available with a choice of the in 1.4 and 1.6 litre diesel engines. 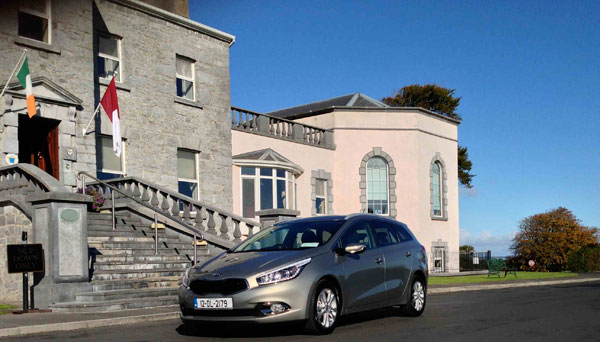 Each new cee’d is fitted with six airbags as standard. This includes the front, front side and full length curtain. Kia also tells us that pedestrian safety is improved with the adoption of collapsible headlamps, a stiffer lower bumper lip, and shock-absorbing structures in the hood and its hinges.

The first generation cee’d launched launched late in 2006 was a game-changing model for Kia. Designed, developed and built in Europe, cee’d was the first model to establish Kia as a serious contender to the established brands. The estate model followed in 2007 and for the following four years, it held the impressive accolade of being Ireland’s best selling estate car.

The new model Sportswagon has been designed and engineered in Europe. In addition, it is manufactured exclusively in Europe.

The cee’d range has sold some 5000 units since it’s launch and the estate derivative has comprised 45% of these sales. Kia Motors Ireland MD, James Brooks is confident that the new cee’d Sportswagon will emulate the success of its predecessor .

He told the Auto Trade Journal: “The cee’d SW was an extremely important model for us and quickly became a hit with Irish consumers. We are confident that the new Sportswagon will also be a success. With a walk of just €800 from the hatchback, we think that many consumers will be tempted to avail of the added space available that comes at no sacrifice to style and driving dynamics. All backed of course by the peace of mind of our unbeatable 7 year warranty“.

It really looks well, offers an impressive package and it is a really nice car to drive. 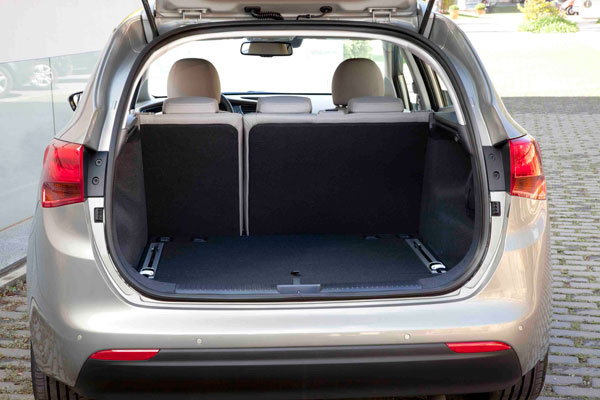