The UEFA Europa League is the world’s largest professional club football competition, involving 48 clubs from 55 countries across Europe, and attracting a global cumulative TV audience of 1 billion across all programming. As Official Partner, Kia Motors will supply a fleet of 90 vehicles for the UEFA Europa League finals in 2019, 2020 and 2021. The fleet will be used to transport referees, officials, delegates and VIPs. 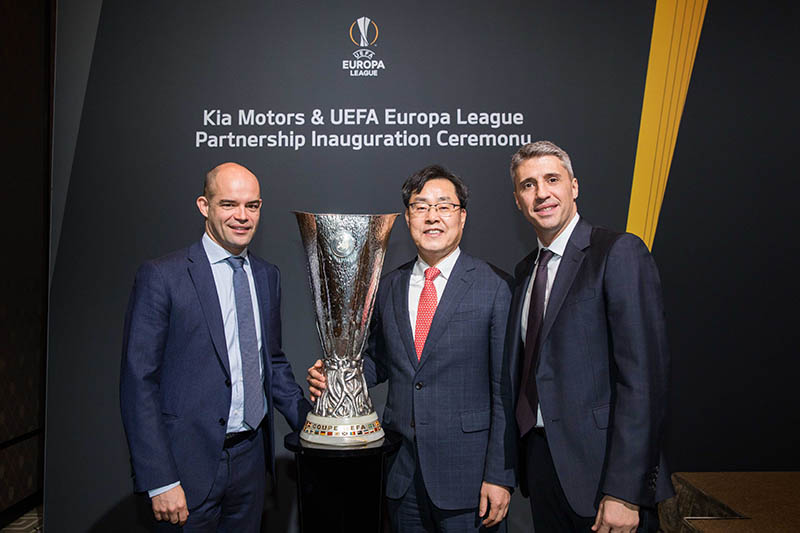 “This partnership inauguration ceremony celebrates the start of a new and exciting era for Kia Motors and UEFA. We are excited to become an Official Partner of the UEFA Europa League for the next three seasons, continuing our long-established link with the most popular sport, not just in Europe but around the world,” commented Yong-Won Cho, Senior Vice President and Chief Marketing Officer at Kia Motors Corporation. “The UEFA Europa League presents us with the perfect platform from which to engage more closely with fans all over the globe, and enhancing Kia’s visibility as an exciting, dynamic brand for the young-at-heart.”

“We are soon to embark on our first full season in partnership with Kia Motors for the UEFA Europa League which is the largest professional club football competition in Europe with 28 countries represented in the group stage this season. The competition also features football players from every corner of the world, so we are looking forward to working together with Kia to build mass fan engagement,” said Peter Willems, Head of Marketing Activities & Sponsorship of UEFA Events SA. “Together we will harness the power to surprise by creating the first global UEFA Europe League Trophy Tour presented by Kia which will be a fantastic opportunity to promote the competition and Kia’s core brand values. Each season the competition reaches a television audience of one billion viewers, 45% of which live outside of Europe, so we value partners such as Kia Motors that have such a great reach. Today we officially welcome Kia Motors into the UEFA Europa League commercial partner family for the 2018-2021 cycle and look forward to working together to promote the competition.”

UEFA Ambassador and football legend Hernan Crespo added, “I am a huge fan of the UEFA Europa League. I have fantastic memories of playing in the competition and even lifting the iconic trophy in 1999. The competition goes from strength to strength and now with the support of Kia Motors, this is something that can only continue to accelerate. I wish every success to Kia Motors and to UEFA at the start of this fantastic partnership.”

The UEFA Europa League 2018/19 season group stage will commence on September 20, 2018 while the knock-out stage will start on February 14, 2019. The final will be held at Baku’s Olympic Stadium on May 29, 2019 where Kia will roll-out various activities to empower excitement and unique experiences to football fans around the world.