Irish motorists are now more open to switching to electric and hybrid cars according to the most recent Carzone Motoring Report. 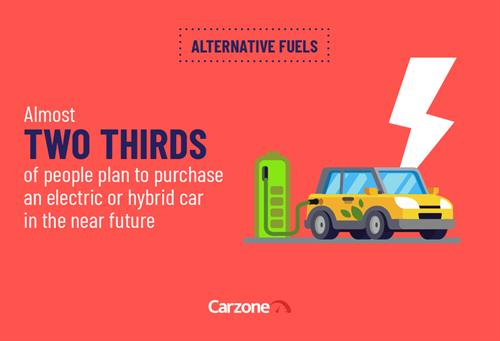 The bi-annual report examines trends in the Irish motoring market and finds that 61 per cent of motorists say their running costs have increased in the last 12 months with 29 per cent stating they spend upwards of €250 per month on keeping their vehicle on the road.

Given this rise in running costs, it’s no surprise that almost half (45 per cent) of those questioned say cheaper running costs is the number one reason for considering changing to electric or hybrid from petrol or diesel. The environmental benefits was the second most popular reason to make the switch (40 per cent).

According to the Carzone Motoring Report, almost 60 per cent of those polled were not aware of Ireland’s Electric Vehicle Grant Scheme, which allows private buyers to receive a grant of up to €5,000 when purchasing a new electric vehicle. However, despite the lack of awareness for the grant scheme, I still find it astonishing that this report found almost two thirds claim they plan to purchase an electric or hybrid car in the near future. If a poll was conducted in rural Ireland, I’d happily wager that the answer to the question would look a lot different.

As Ireland works on improving its carbon footprint, electric charging points are appearing in more locations throughout the country. 60 per cent know where their nearest charging point is and 40 per cent say it’s located less than 2kms away from their home.

Commenting on the findings, Karl Connolly, Audience Manager Carzone said: “This year’s report shows a shift in attitude towards electric and hybrid cars as motorists get to grips with alternative fuels and the benefits they bring. It’s encouraging to see that awareness of alternative fuel cars is high among drivers and they are informed when it comes to the services, like charging points, that are available in their locality.”