Once again, Irish Ferries were honoured with the ‘Best Ferry Company’ title for the 11th year in succession at the 26th Irish Travel Trade Awards ceremony.

Attended by a large number of guests from the travel industry, the awards were presented on foot of independent votes cast by travel trade professionals working in agencies across Ireland, north and south. 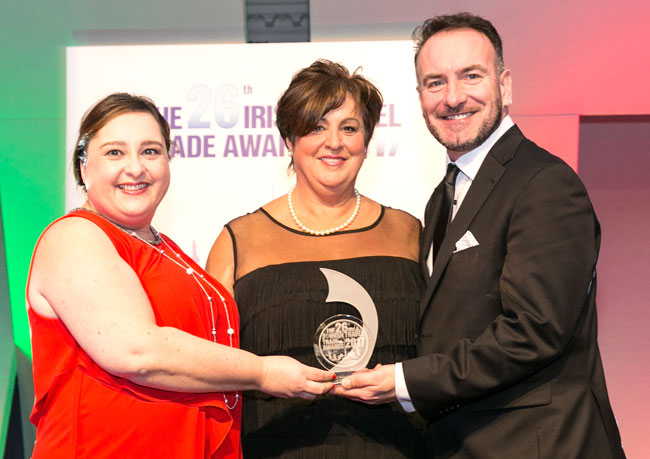 Their latest success means Irish Ferries continues to hold the two key ‘Best Ferry Company’ titles from Ireland’s travel trade, having also been awarded the top honour at the 2017 Irish Travel Industry Awards. In addition, the Company also received the ‘Best Ferry Company’ award at the Group Leisure & Travel Awards in the UK earlier this year.

Accepting the accolade, Irish Ferries head of passenger sales Dermot Merrigan thanked Irish travel agents for their continued support, adding: “Irish Ferries is honoured to receive this award which, in our eyes, is an independent acknowledgement of the work we have been doing and the investment we have made over many years to improve the standard and quality of service that our customers can expect.”

Currently, the Company is building the new €144million, 55,000 tonnes cruise ferry, W. B. Yeats – which will be the largest and most luxurious ferry ever to sail on the Irish Sea when it enters service on Irish Ferries’ Dublin – Holyhead and Ireland – France routes next Summer.