Ireland has recorded a healthy 12 per cent increase in brand value over the past year, to US$604 billion, according to the latest report by Brand Finance, a leading independent brand valuation consultancy.

Ireland is the fastest-growing nation brand in Western Europe this year, while all other players in the region have recorded a minimal uptick or a decline. In addition, although ranked 26th globally for absolute brand value, considering brand value per capita, Ireland takes second spot, behind only Luxembourg. 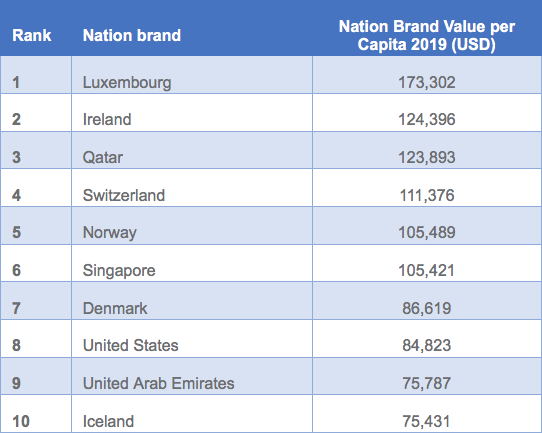 By contrast, in the same period, the UK’s nation brand value and the combined brand value of the other EU member states have only grown 19 and 32 per cent respectively.

Simon Haigh, MD of Brand Finance Ireland commented: “We are in uncertain and fragile times across Europe. Currently the outlook for growth in the Irish economy looks positive, bolstered by the strength of our home-grown brands, and the very significant influx of inward investment in recent years. However, a potential no-deal Brexit is likely to cause challenges for the Irish economy moving forward.”

Nation brand values of most developed economies have contracted or stagnated year on year. Japan is a notable exception with 26 per cent growth, but even so – it is only the 15th fastest-growing nation brand this year, behind many developing African, Middle Eastern, Asian, and Latin American nation brands. Consistently with previous years’ trends, 11 out of the 20 fastest-growing nation brands of 2019 come from the Middle East and Africa, with Ghana (up 67 per cent), Uganda (up 56 per cent), and Egypt (up 50 per cent) in the top five.

David Haigh, CEO of Brand Finance added: “With the Western world seeing a real crisis of leadership on both sides of the Atlantic, the developing world is catching up. Bolder, more agile, increasingly innovative African, Middle Eastern, Asian, and Latin American nation brands are racing ahead at breakneck speed, poised for further growth in the years to come.”

China shows no sign of slowing
Claiming second position, China continues to grow at a very healthy rate, recording an impressive 40 per cent increase in brand value to US$19.5 trillion. Building on its solid performance in previous years, China is closing the gap behind long-standing leader the US, which has recorded a brand value growth of just seven per cent over the past year. The difference in value between the two nation brands has dropped from US$12 trillion last year to just over US$8 trillion in 2019.

The two largest economies in the world have been at loggerheads since July last year in a bitter trade war, with tariffs imposed by both sides on billions of dollars’ worth of imports and exports. Despite this, China’s brand value has defied the expectations of a slowdown, benefitting from the glowing success of some of its most dominant and valuable brands, including ICBC, Huawei, and Alibaba. The latter two in particular have embraced strong marketing strategies that mirror their international counterparts, which have helped successfully propel them onto the global stage as legitimate competitors to Western brands.

David Haigh continued: “China is undergoing a meteoric rise on the global stage, rivalling the traditional nation brand powerhouses in the West. Despite economic and political challenges, China’s nation brand value has grown by 40 per cent, consistently outpacing the US and other major economies.” 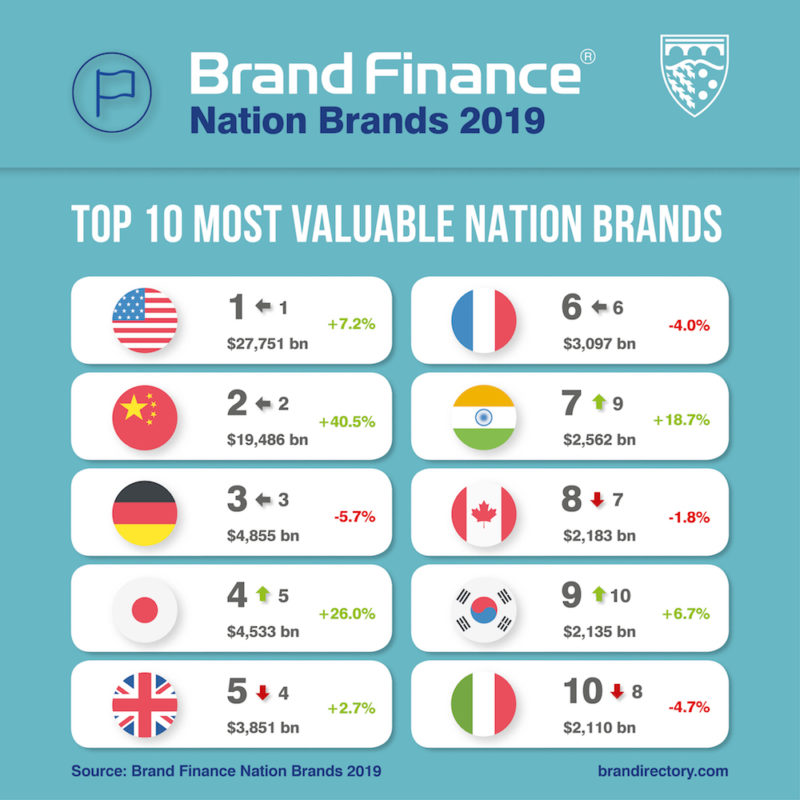 Japan overtakes UK
Behind the US, China, and third-placed Germany, Japan’s brand value has increased 26 per cent to US$4.5 trillion, pushing the UK into fifth rank. In spite of predictions that its economy would suffer in the face of a global slowdown, Japan has been able to reap the benefits from its solid consumer spend and high levels of business investment. As the tech powerhouse economy of Asia, Japan is progressively forward-thinking and outward-looking, protecting itself amid global uncertainty. Championed by Abe and Trump, the Free and Open Indo-Pacific Strategy supports and promotes connectivity and free trade in its own right. However, the nation is contending with its ‘super-aging’ society putting pressure on social and health services.

In addition to measuring overall brand value, Brand Finance also evaluates the relative strength of nation brands, determined by performance on dozens of data points across three key pillars: Goods & Services, Investment, and Society. According to these criteria, Japan has also recorded solid growth in brand strength, jumping to a AAA brand strength rating, with a corresponding BSI score of 85.8 out of 100.

David Haigh said: “Japan is increasingly becoming a tourism hotspot, with millions visiting every year hoping to soak up the culture and explore all the country has to offer. With the nation currently hosting the 2019 Rugby World Cup and next summer’s Tokyo 2020 Olympics just around the corner, there is no doubt we will see an even greater uplift in Japan’s brand strength in the future.”

No new entrants in top 10
Although there were no new entrants to the club, India (up 19 per cent to US$2.6 trillion) has made the largest jump within the top 10 – from ninth to seventh position.

Top turnaround: Turkey
Turkey has recorded a remarkable turnaround from its performance in 2018, going from a loss of almost a third of its nation brand value, to this year leaping up 47 per cent to US$560 billion.

Singapore is world’s strongest
Singapore has retained its title of the world’s strongest nation brand, earning the elite AAA+ rating and a Brand Strength Index (BSI) score of 90.5 out of 100. Although this is a slight drop from 2018, Singapore is the only nation in the ranking to record a BSI over 90.