The approval follows ongoing campaigning from within the industry and also government quarters both at home and abroad, which has collectively championed the rights of the aftermarket in the fight to keep access open to the OBD port. 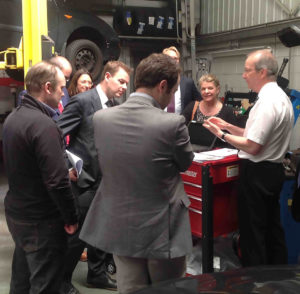 During his visit to the workshop, Dalton heard growing concerns from the automotive aftermarket, where it was made further clear that without such access, the future of the entire aftermarket would “be thrown into doubt”.

Since it was announced that the aftermarket could lose access to the OBD port, the IAAF, in partnership with FIGIEFA, has fought against the initial proposals, arguing that a level playing field should be provided to ensure consumer freedom of choice when repairing and maintaining vehicles. Over the last 18 months, the IAAF has held meetings with Dalton and the IMCO committee to put forward the aftermarket perspective as part of this process.

Progress has already been made during this period, with over 184 amendments being approved by the IMCO, as part of the forthcoming type approval legislation, which relate to the diagnostics, repair and maintenance of vehicles. The changes, an important step towards improving the legislative framework for independent operators, followed the publication of the ‘Dalton Report’.

Wendy Williamson, IAAF chief executive said: “We’re extremely grateful for the huge political support we have received on this issue from Daniel Dalton, in campaigning alongside us and other industry voices for the future of the independent aftermarket.

“Not only has the Dalton Report been pivotal in our fight but his proactive role, evident in his visit to a garage and meeting with aftermarket stakeholders, has galvanised our collaborative efforts in achieving this absolutely magnificent result we’ve been pushing for – to ensure aftermarket access to the OBD port.”

The agreement will now be submitted for final approval by the European Parliament, where it is widely assumed the result will be endorsed in the Parliament’s final voting session in April.