John Saunders Sales and Marketing Director, Universal Honda Ltd. representatives from Kevin O’Leary Honda, Hurley Bros Honda and Johnson and Perrott Honda presented Emma Duhlohery and her team mates at Skibbereen Rowing Club with a cheque for €5,000, which they will use to purchase a new training quad skull.
First runner up was St. Nicks Ladies Football Club and 2nd runner up was 63rd Cloyne Scout Group, who both received cheques from Universal Honda Ltd. of €1,000 and €500 respectively. The Honda – Powering Local Dreams initiative is designed to support the local community by telling their stories and granting a €5,000 cash prize to the winning club, group or organisation. It was launched in Cork in early August, and all groups, clubs and organisations that celebrate, include, value, nurture, share and enhance their community were invited to enter. The 3 finalists, Skibbereen Rowing Club, St. Nicks Ladies Football Club and 63rd Cloyne Scout Group, were selected from a broad spectrum of entries representing Cork community life. Each finalist then made a short video on what they do in the community and why they deserved to win Honda Powering Local Dreams. This video was then shared on Honda’s social media and website and ultimately the public decided by voting online for their favourite video, who would be the overall winner of Honda Powering Local Dreams Cork 2017. 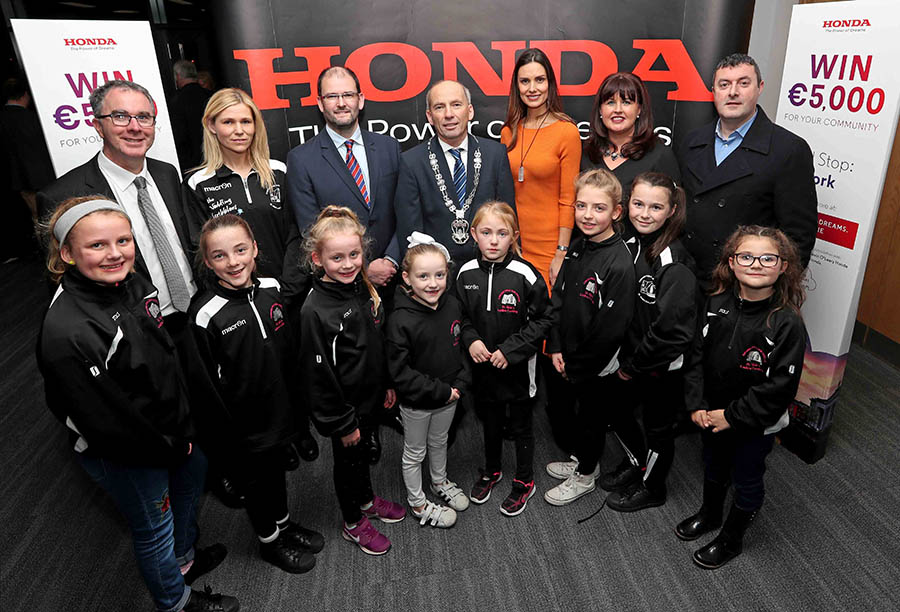 The Honda Powering Local Dreams Awards night was presented by Honda Brand Ambassador Alison Canavan. Each of the finalists videos were shown on stage and Alison spoke to Emily Duhlohery of Skibbereen Rowing Club, David Lane of St. Nicks Ladies Football Club and Eoin O’Brien of 63rd Cloyne Scouts Group who all eloquently told the worthy stories of their clubs. A big surprise on the evening was the announcement that in addition to the top prize of €5,000, Honda would sponsor both a 2nd prize of €1,000 and a 3rd prize of €500, meaning all three finalists went home with much needed funds towards their future projects.

John Saunders, Sales and Marketing Director, Universal Honda Ireland, “I am very proud to be involved in the “Powering Local Dream” Project. We had some fantastic applications from across the community, from social initiative, sports clubs and community groups this year and all I can say is that Cork you should be incredibly proud of the people within your communities who do such selfless work and commit so much of their own time to their locality. I would like to congratulate our 3 deserving finalists and in particular our overall winner Skibbereen Rowing Club.”

Emily Duholery, Skibbereen Rowing Club commented: “Skibbereen rowing club is delighted to have won this competition run by Honda which showcased community groups right around county Cork. Skibbereen rowing club has been encouraging young people to try rowing since the clubs doors were opened in 1970. Right from the start athletes have busy training hard, which in turn has led to many national and international honours.”

“Over the years Skibbereen rowing club has been the home to many successful athletes who have gone on to represent Ireland at the highest level of competition namely Gary and Paul O’Donovan, Denise Walsh, Mark O Donovan and Shane and Driscoll. With this prize money Skibbereen rowing club will purchase a new training boat. These types of boats are wider and much more stable compare to the typical racing boats, therefore are much safer for beginners to learn to row in. A new training boat will prove to be a vital piece of equipment for powering future dreams of our next generation of athletes-Big thank you again to Honda from all in Skibbereen rowing club.”