The University of Hertfordshire’s UH Racing Team, a long-standing Formula Student team, is aiming for a top five finish at this year’s event, which is set to take place at Silverstone from July 17-21. Once again, UH Racing will be supported by principal sponsor Henkel and its industry-leading Loctite range of products, an increasing number of which have been put to good use on the 2019 car.

“In Formula One terms we probably now see ourselves as the equivalent of Force India, a good team with a modest budget that punches above its weight,” explains UH Racing’s team leader and driver Ryan Clabon, who is now in his fourth year of a Masters in Automotive Engineering. “However, due to the advances we’ve made with the 2019 car, and one or two other factors, this year we’re hoping for a top 10 finish, possibly even top five.” 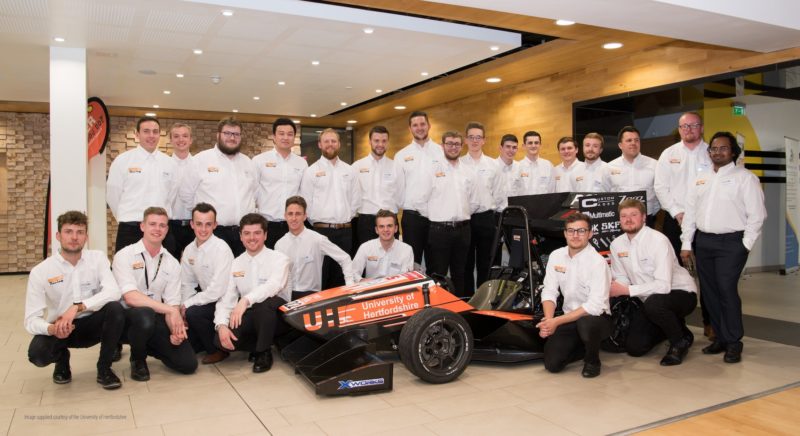 As with all motorsport disciplines, car evolution is vital to steal a march on the competition – over 90 teams will be competing at Silverstone. Each year a new single-seat race car is designed, manufactured and built by UH Racing, with support from the university, partners and alumni. And while the team’s base car remains the same as last year, the set-up has been meticulously refined. The steering column, for example, now features a completely new design.

“Previously we had around 5° of compliance in the steering system, for which the driver had to compensate,” explains Clabon. “Now, however, it is less than 0.5°, which is a really positive development for our hopes on the track.”

As with past years, one of the most commonly deployed Loctite products on the UH Racing car is Teromix 6700, a polyurethane-based two-part adhesive which cures at room temperature.

“We use Loctite 6700 for bonding in many places, including all of the car’s aerodynamic devices, structural members, carbon-fibre suspension rods and crash structure foam panels,” adds Clabon.

Further Henkel products used extensively include Loctite 270 high-strength and Loctite 243 medium-strength threadlocking adhesives. These threadlockers are vital to ensure assembled components retain their integrity while being put through the various Formula Student disciplines, which include sprint, acceleration, endurance and skid-pan tests.

“As you can tell, we rely heavily on Loctite products from Henkel for a whole host of applications,” Clabon continues. “The products are easy to apply and have never let us down. I think UH Racing has been using Loctite on its race cars since the 1999 Formula Student event. Moreover, we always get good support from Henkel if we need some advice.”

The UH Racing 2019 car is now officially launched and undergoing test runs. This year, prior to Silverstone, the team will compete at Formula Student Netherlands from July 7-11 at the TT Circuit in Assen.

“In 2018 the car struggled a bit with reliability, so this year we’ve adopted the strategy of entering another Formula Student event before going to Silverstone, which will hopefully allow us to get any niggles out of the system,” concludes Clabon. “Ultimately, being able to gain significant mileage on the car will prove vital to performance and competition preparation by increasing driver confidence and ironing out any reliability issues.”