In the latest vehicles, traditional bulbs such as halogen and xenon are gradually becoming a thing of the past as vehicle manufacturers (VMs) seek more environmentally friendly and economically efficient lighting solutions. As a result, the VMs are switching to light-emitting diode (LED) systems for the majority of their lighting functions because, as well as providing better quality illumination with greater flexibility, LEDs consume up to 90% less energy and can last 25 times longer than standard bulbs.

In layman terms, an LED consists of several different layers of semiconductor compounds, whose electrical conductivity lies between that of conductors, like copper and non-conducting materials, such as glass, to make up a chip. The conductivity of semiconductors such as silicon however, can be influenced by adding electrically active matter to contain either positive or negative electrons, which when an electrical current is passed across, emits light.
Naturally, the structure and type of layers used within each chip have a crucial bearing on the light efficiency and light colour of the resulting LED, but another huge advantage of the technology is the ability to arrange the chips and control the light emitting layers to tailor the illumination as is required.

As they are non-wearing and designed for a service life of up to 100,000 hours – or the lifetime of the vehicle – in addition to their light quality and energy efficiency benefits, LEDs are also maintenance-free and therefore present no on-going cost threat to drivers. 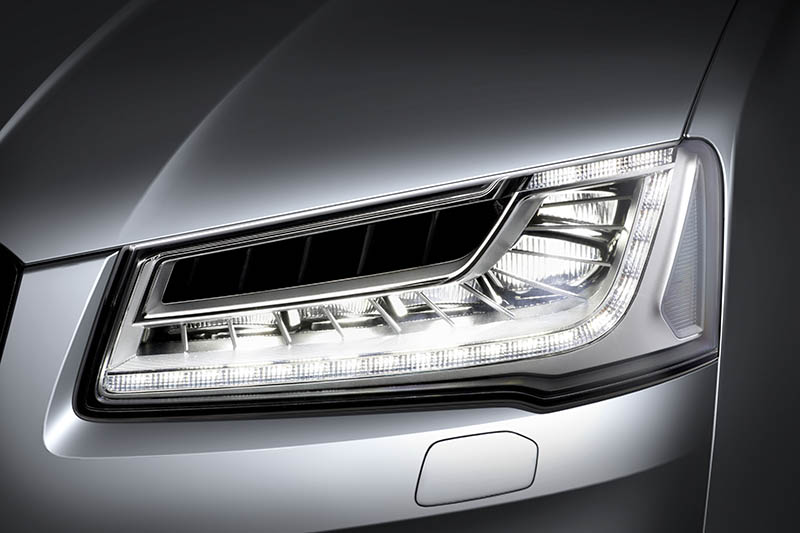 With these considerable advantages in mind, respected original equipment (OE) manufacturer and systems supplier Hella has led the way in LED technology, providing VMs with a wide range of highly effective LED lighting solutions for more than 20 years. To further underline its leading position, in 2010 alone, the company built 364,000,000 LEDs.

However, innovation is not a recent phenomenon, as Hella has been developing revolutionary and light-transforming products that have changed the face of the industry since 1899. It was Hella that introduced the first electrical headlamp in 1908 and also went on to create the asymmetric light distribution system in 1957. As the world entered the 21st century, Hella continued to lead the way in lighting design with the introduction of the bending light in 2003, its first complete LED headlight in 2008 and then the Matrix LED glare-free high beam system in 2013.

Used originally in the Audi A8 and subsequently the A6, the Matrix LED, with its dynamic characteristics, is one of Hella’s most recognisable and successful products. The headlight consists of 64 LEDs, which used in conjunction with intelligent control technology can be constantly adjusted to provide and distribute the necessary light for any given solution, through a simple on/off switching system. This ensures that the driver has the right amount and spread of light to suit the conditions, be that the weather, type of road or speed at which they are travelling.

Hella’s expertise naturally goes beyond these impressive OE installations to provide a multitude of aftermarket solutions across both automotive and commercial/public service vehicle applications. Perhaps the most ‘visible’ from an automotive perspective, is its range of daytime running lights (DRL).

In addition to individual 90mm diameter and horizontal multiple DRL light sets, Hella offers the LEDay Flex option, which combines safety and personalisation. With two pre-wired chains of either five or eight high-tech optic light modules, LEDay Flex light sets allow for individual design styles, while still providing all the benefits of greater visibility and safety, alongside a reduction in electrical consumption when compared to driving with low beam lights.

As the demand for LED lights increases for both OE and aftermarket applications, Hella continues to develop the technology required to shape the LED era and in the process further underline its justified reputation for LED competence.