When Gabriel Downes opened an old biscuit tin he found while trying to trace a leak in the upstairs of Downes & Sons Garage on Spenser Street, in Castlebar, he found a treasure trove of old cash books and much more dating back to when the business was founded 84 years ago, writes Padraic Deane. 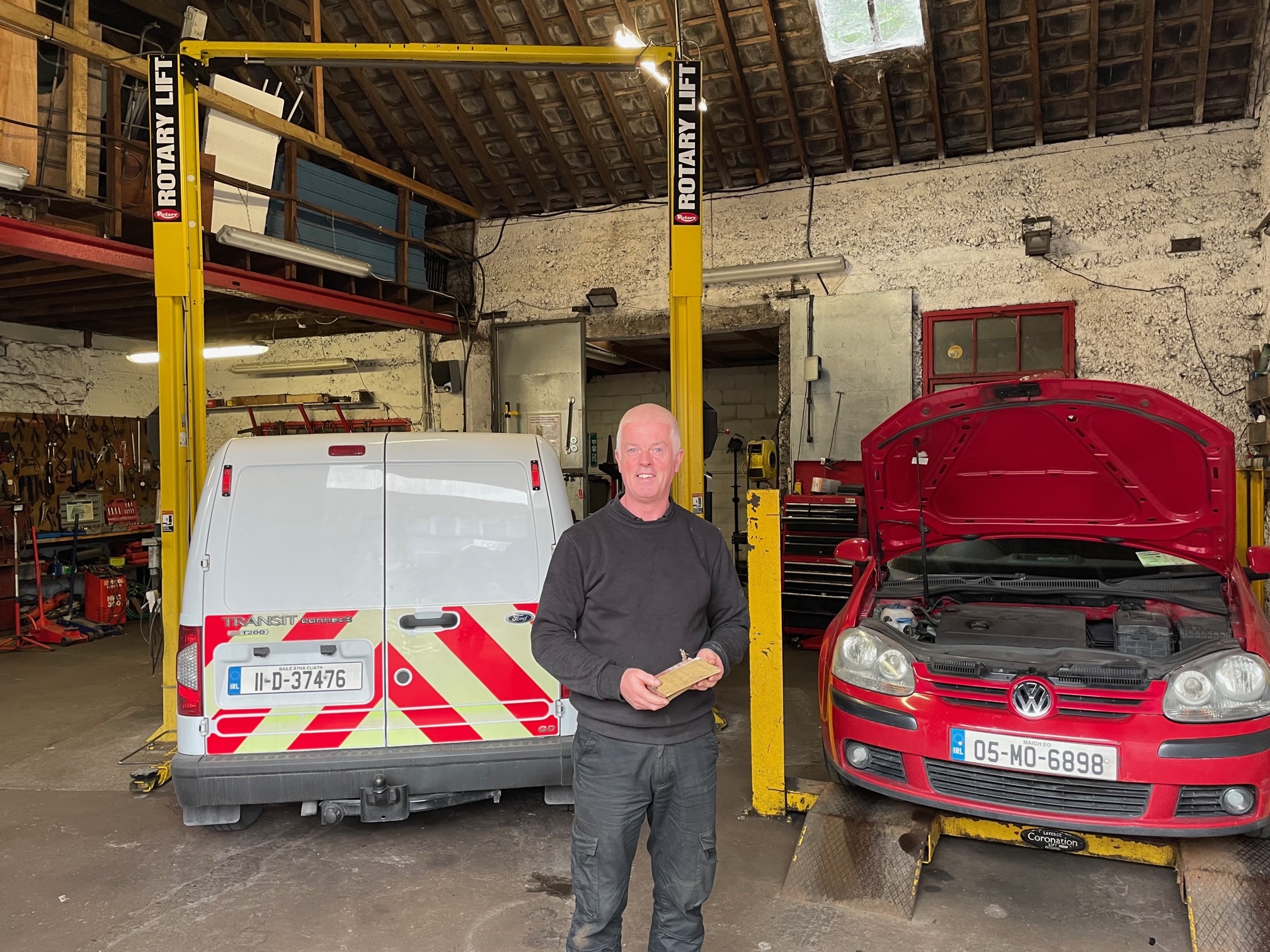 Gabriel Downes in his business Downes & Sons Garage on Spenser Street, in Castleber, with some of the cash books he found.

Gabriel is the current owner, and the old cash books were kept by his grandfather, William Downes, back in the 1930s. They included information on the day-to-day records and business transactions at the garage back then.

Gabriel told me: “When I opened the box, I found a few cash books dating from December 31, 1937, to 1946. Two of the books were from the old Munster & Leinster Bank in the name of my grandfather, William Downes, with his address in Blackfort, Castlebar.”

Gabriel added: “My grandfather started the business in 1937. He died in 1966 and my father, Henry, who was then 34 years old, took over the business. He had been working in the garage from the age of 16. I followed the same path, as the third generation, starting there in 1981.

“There is a four-poster lift here. It is a Laycock lift, a Coronation lift of 1953, and it has been in operation ever since. I had a couple of issues with it. It is a chain-screw lift.

“I put in an ordinary two-post lift 15 years ago and the company who installed it for me were able to get screws for the four-post lift, but the four screws were nearly the price of the two-post lift. 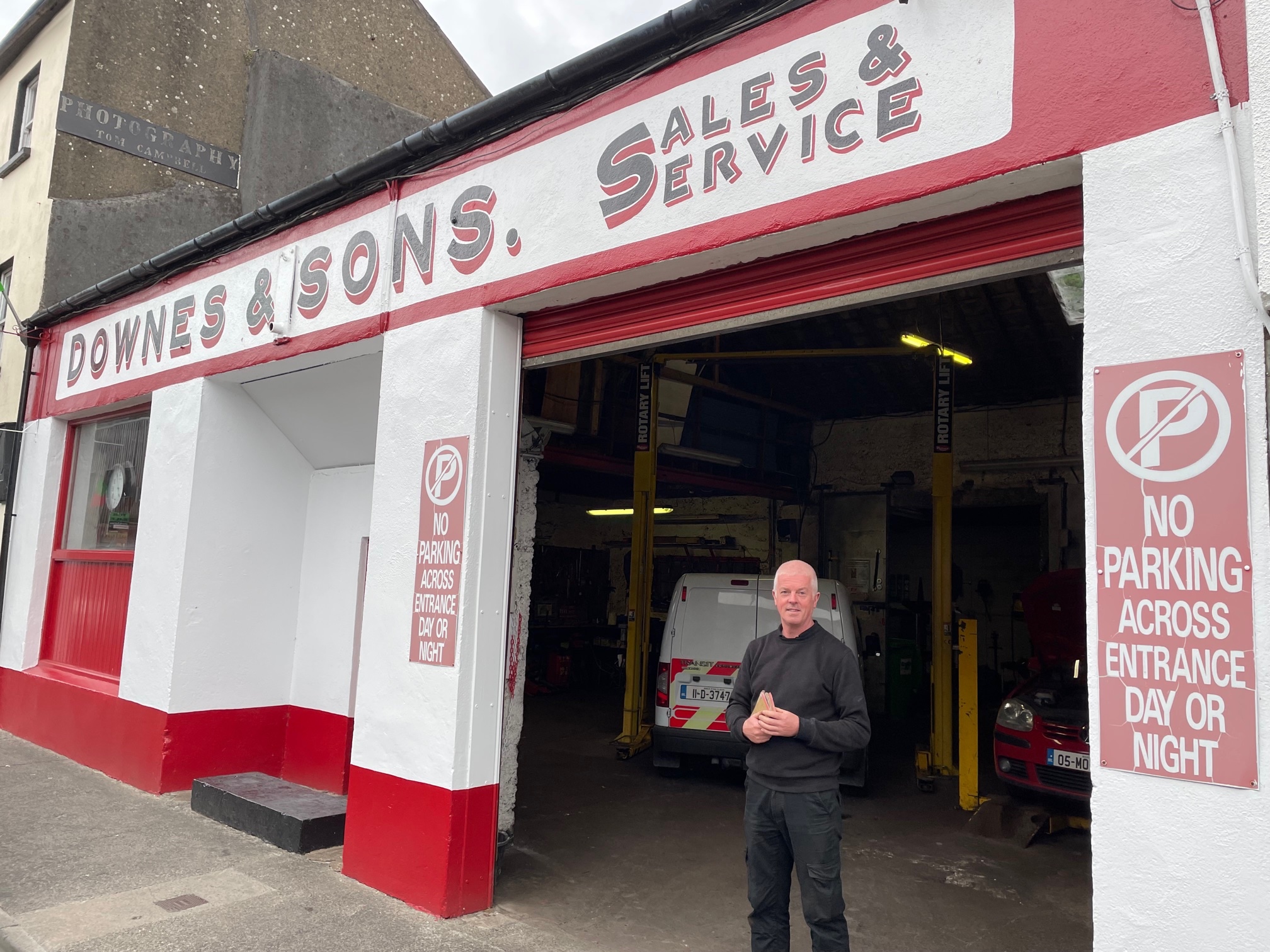 Gabriel Downes pictured at the entrance to Downes & Sons with the old cash books he found at his garage on Spencer Street, Castlebar.

“I’d be fairly sure that any garages seeking planning permission now wouldn’t get the go ahead for a town centre garage. Such developments would have to be on the outskirts of town or in an industrial estate. The garage was built where three houses had previously been on the site.”

Gabriel also told me: “We had petrol pumps outside on the street up to the late 1970s. The tanks are located in the middle of the floor of the garage. That would not be allowed under current health and safety today.”

He added: “My neighbour Henry Horkan, who does picture framing, had a compressor when he started that he bought from Roadstone. But the motor to drive it seized up. He took the motor from the petrol pump and it is still going today. 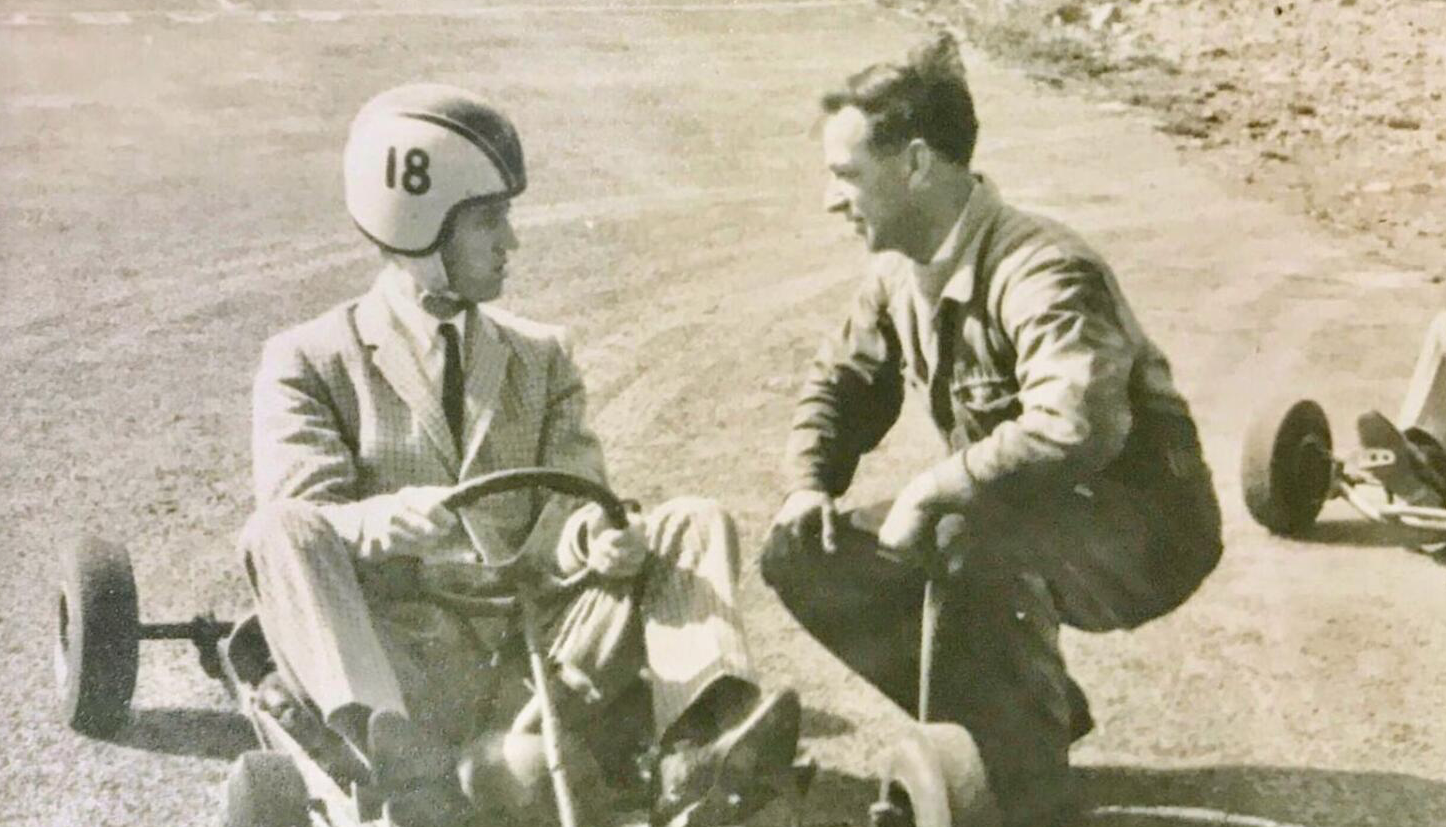 Gabriel’s father, Henry Downes, pictured with Dickie Rock at the Go-Kart race track at Keelcoil, Breaffy, which was opened in July 1964. Gabriel’s father, Henry, was a founding member of a go-kart club which was established in Castlebar in the 1960s. In July 1964 they opened a go-kart track at Keelcoil, Breaffy. On occasion back then, the club staged a series of go-kart races around the streets of Castlebar.

“On examining the cash books I found that on December 31, 1940, there was £1,661 brought forward, which in today’s terms would be savage. There is also a record of cheques paid out and received as well as cheques returned.”

In one of the cash books a gentle reminder to customers who had an outstanding account read as follows: ‘Fearing that this account has escaped your notice we venture to ask the favour of a remittance in the course of a few days’. But that going unheeded the following correspondence was sent out: ‘FINAL APPLICATION: Unless this account is paid within seven days we will hand the matter to our solicitors for collection’.

Gabriel said that: “In accounts from 1954, I found that an uncle of my wife, AnnMarie (nee Deane), worked in the garage.” 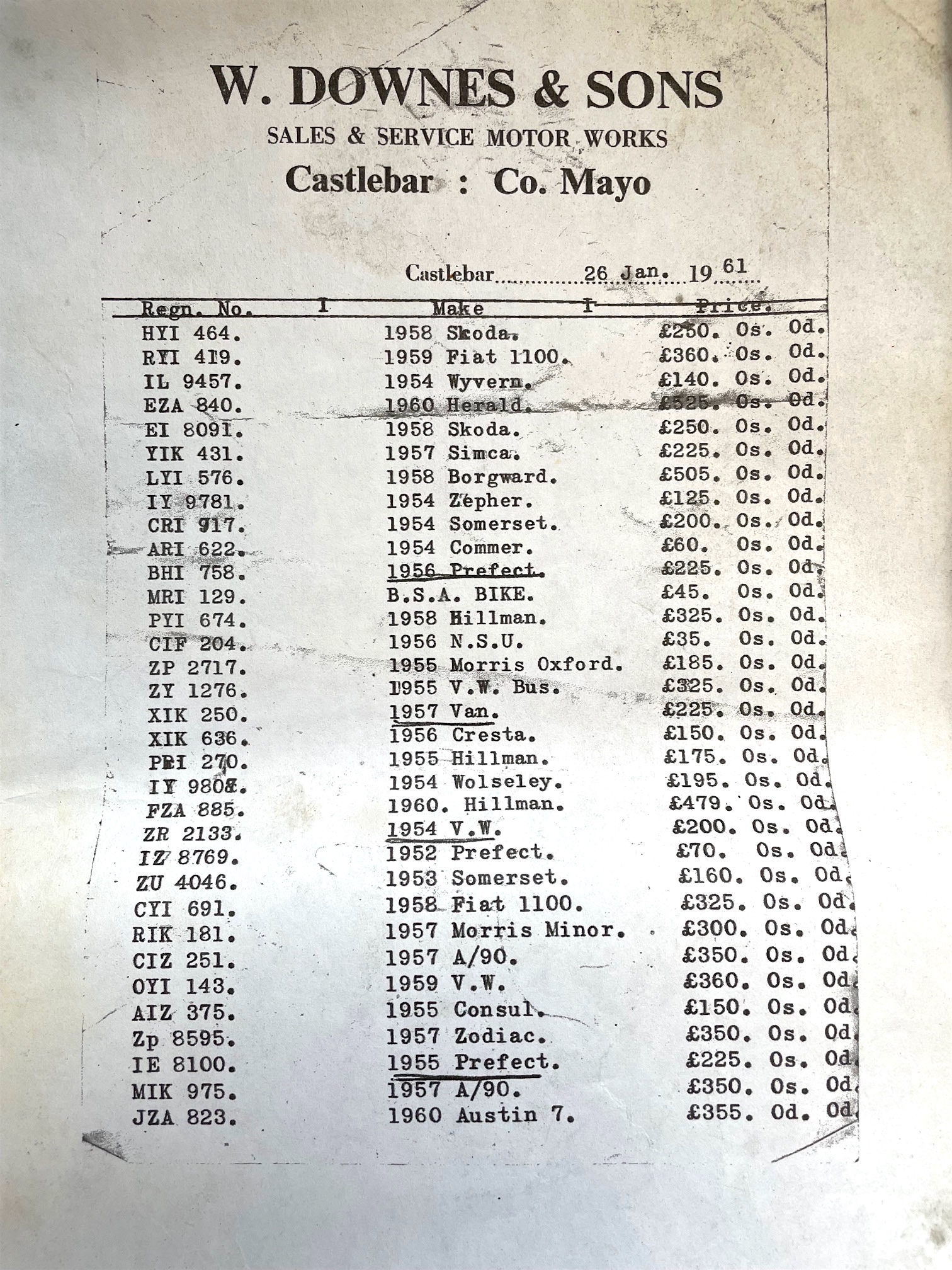 Gabriel also came across a price list for motor cars that the garage had for sale on January 26, 1961, listing the registration, make and price. 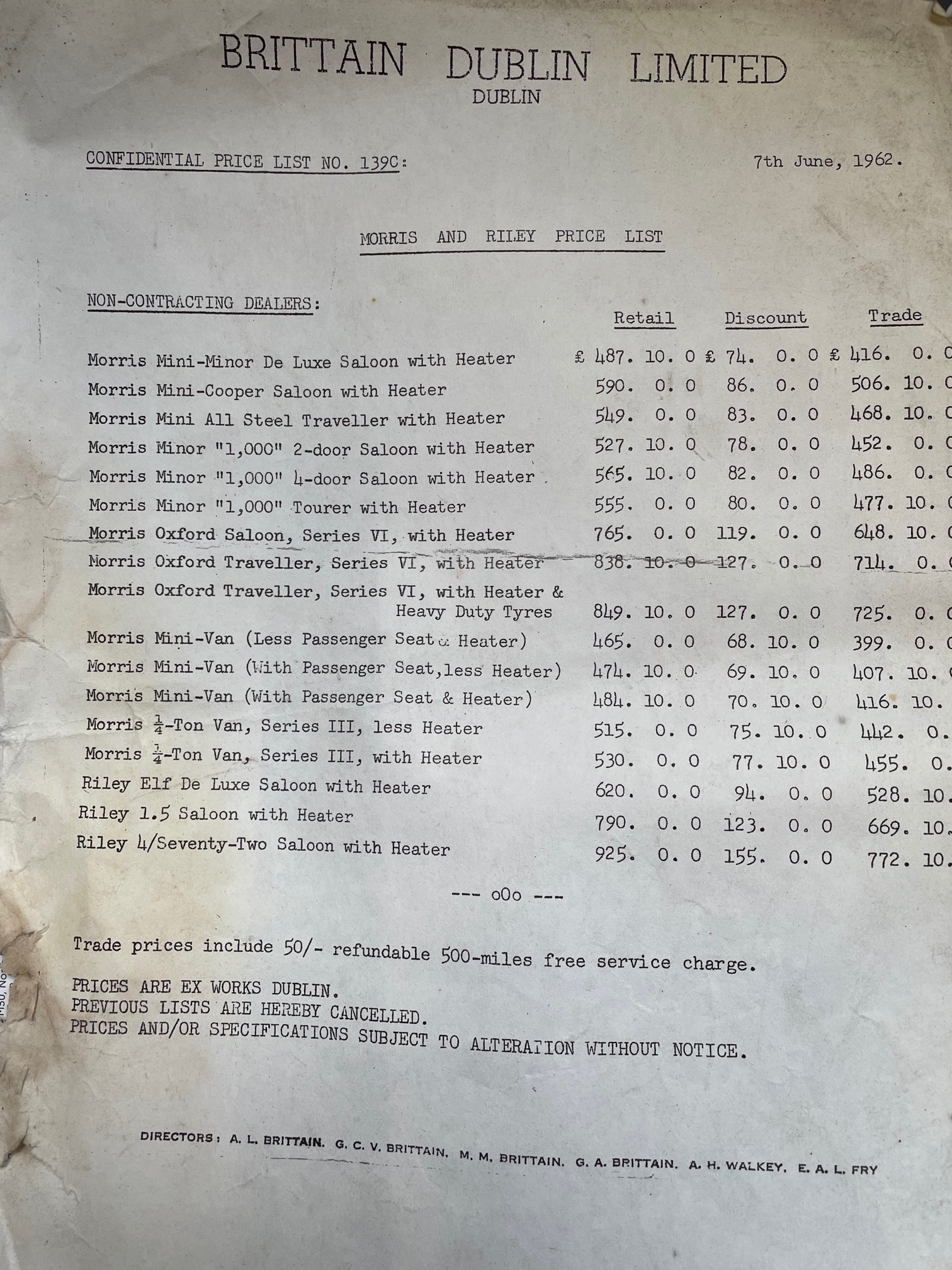