Four-year-old Karl Hancock has followed in the tracks of his NGK-sponsored four-time World Speedway Champion Dad Greg by taking part in his first-ever meeting.

The youngster competed on his 50cc bike at the Gumball Rally held at the Grand Arena, Industry Hills, La Puente, California, an event which also saw his elder brother Wilbur take part.

John Money, who looks after Speedway sponsorship on behalf of NGK, said: “It was the first time that Karl had raced in a meeting. Results are unimportant in these events, but by all accounts, Karl thoroughly enjoyed himself and did really well competing in multiple races against more experienced youngsters in his first ever event. He’s obviously following the family tradition.” 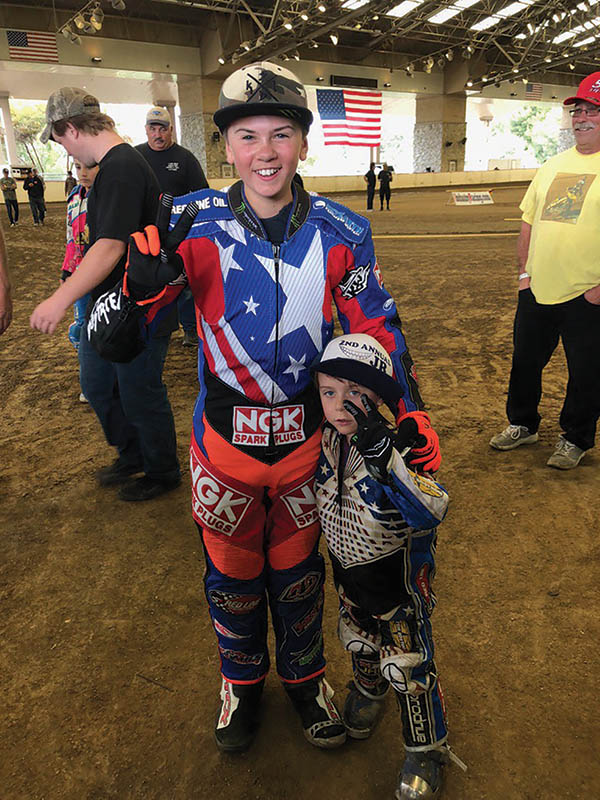 NGK Spark Plugs (UK) Ltd – the leading supplier of original equipment (OE) spark plugs, glow plugs and NTK Lambda and other engine management sensors – has been a long-time supporter of Greg and announced last July that it is sponsoring 12-year-old Wilbur too.

Greg and chief mechanic Rafal Haj recently announced they had joined forces to launch their own Speedway Grand Prix Team for the 2018 season.

The Hancock Haj Grand Prix (HHGP) team will also include 2012 World Champion Chris Holder who will line-up in the FIM Speedway Grand Prix series alongside Greg and Czech rider Vaclav Milik, who is second reserve for the championship.

The 2018 Speedway Grand Prix season gets underway in Warsaw, Poland on May 12.
For more information on NGK Spark Plugs (UK) Ltd and its products and services, please visit the website www.ngkntk.co.uk Also you can check out its blogzine at ngktorque.com