Ford Ireland has renewed its existing partnership with Irish football for 2018 and in doing so, handed over a fleet of new 181 Ford models to the Football Association of Ireland to assist in the delivery of grassroots football.

Ford has been a long-standing vehicle partner of the FAI (since 2006) and each year, supplies over 30 vehicles to the association including, Ford Focus and Mondeo models. The partnership ensures that FAI Development Officers and other personnel can deliver a detailed programme of grassroots initiatives throughout Ireland. 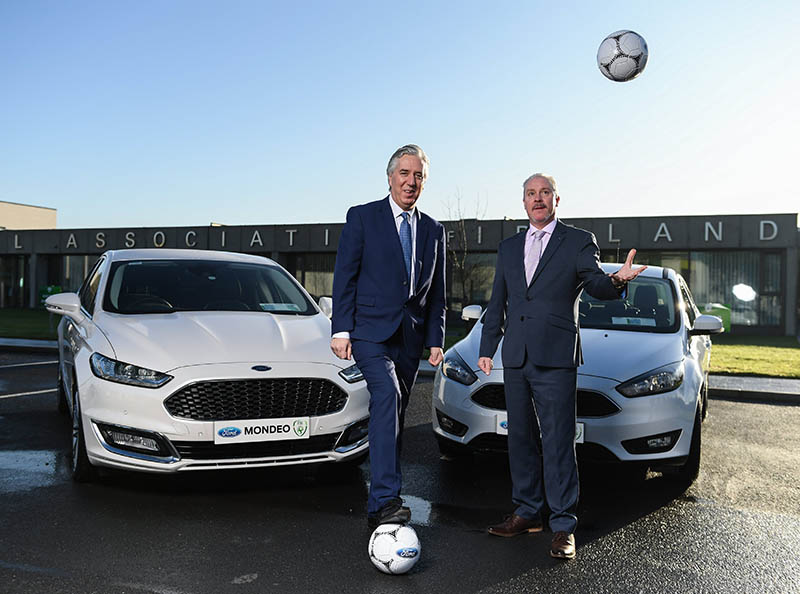 Speaking at today’s announcement, Ciarán McMahon, Managing Director and Chairman of Ford Ireland commented; “As official vehicle partner to the FAI, we’re very proud of our long-standing link with Irish football. Football is ingrained in the Ford brand in Ireland and we are delighted to help foster the game from the roots up through the provision of a fleet of the latest Ford vehicles to key team members within the association.”

Mr. McMahon continued: “We want to invest further in developing the future of Irish football and we’re very excited to partner with the association in introducing some really great grassroots initiatives later this year.”
FAI CEO, John Delaney commented: “We’re incredibly proud to extend our partnership with Ford Ireland. The partnership enables us to offer specific programmes that are delivered to every corner of the country at grassroots level, which is extremely important to the development of football in Ireland. Ford have always had a genuine passion for the game and we are delighted to be in a position to continue working closely with them going forward.”
The dual-branded (Ford and FAI) vehicles can be seen around Ireland as the association’s Development Officers and other representatives work on promoting the game countrywide.