Ford has delivered European public debuts for the new Ford Mustang Bullitt – set to go into production for customers in Europe from June at the Geneva Motor Show.

Celebrating the 50th anniversary of the legendary Warner Bros. film starring Steve McQueen, the new Mustang Bullitt special edition was unveiled with the support of third-generation members of the McQueen family, Chase and Madison McQueen.

The new Edge SUV is the company’s most technically advanced SUV ever, offering a comprehensive range of camera- and sensor-based driver assistance technologies to make journeys more comfortable and less stressful, and to help drivers avoid or mitigate the effects of collisions. The new Edge also debuts in Europe a new powerful and fuel-efficient 238 PS bi-turbo variant of Ford’s 2.0‑litre EcoBlue diesel engine,* combined with a new eight-speed automatic transmission for effortless cruising.

Mustang BULLITT coming to Europe
It’s one of the most epic car chases in movie history. Almost 10 minutes long, the iconic sequence in the Warner Bros. film “Bullitt” follows Steve McQueen at the wheel of a 1968 Mustang GT fastback as he chases two hitmen through the streets of San Francisco. 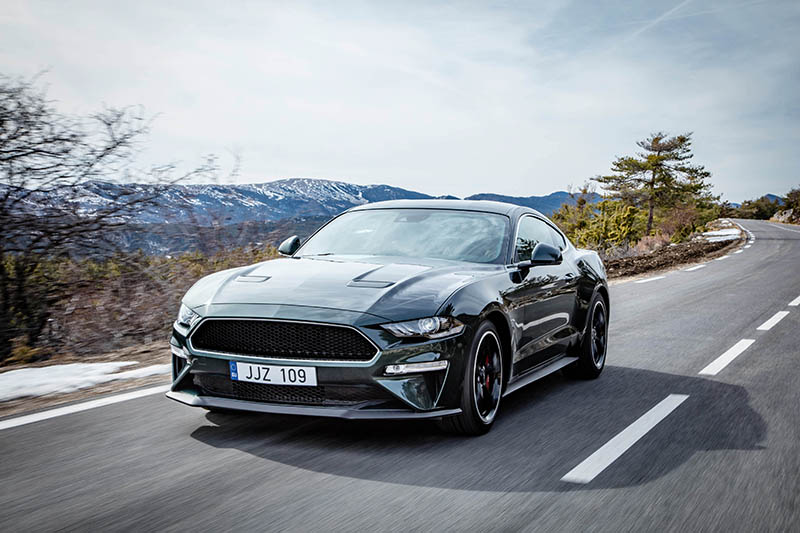 Special edition styling includes 19-inch Torq Thrust-style wheels, red Brembo™ brake callipers and a faux Bullitt fuel-filler cap. The interior features Recaro sports seats, and each Mustang Bullitt will have an individually numbered plaque in place of the traditional Mustang emblem on the passenger-side dashboard. As a nod to the original car’s interior, the gear shifter features a white cue ball gearshift knob.

“Nothing captured the spirit and excitement of Mustang quite like that amazing car chase in ‘Bullitt’,” Armstrong said. “The new Mustang Bullitt will pack a similar punch when it goes on sale this year with more power, exciting new features like rev-matching and B&O PLAY audio, and – just like Steve McQueen – dripping with understated cool.”

Ford enlisted the support of Chase and Madison McQueen, to unveil the new Mustang Bullitt in Europe. Steve McQueen’s grandchildren – supported by their father, Chad McQueen – starred in their own car-chase scene set in the Swiss Alps surrounding Geneva, a homage to the iconic “Bullitt” chase-scene that still resonates with movie fans today.

Appearing on the Ford Geneva Motor Show stand alongside the new Mustang Bullitt is a Highland Green 1968 Ford Mustang GT powered by a 390 cu in (6.4-litre) V8 engine, the same model as the car driven by Steve McQueen in the movie “Bullitt”.

The new Edge debuts in Europe sophisticated new driver assistance technologies including:
Adaptive Cruise Control with Stop-and-Go and Lane Centring Assist helps the vehicle maintain a comfortable driving distance from vehicles ahead and helps reduce stress during long, light-traffic road trips by helping keep the vehicle centred in its lane Post-Collision Braking helps to reduce the impact of a potential secondary collision by automatically applying moderate brake pressure when an initial collision event is detected; slowing the vehicle can potentially lessen injury to occupants and further damage to the vehicle Evasive Steering Assist helps drivers steer around stopped or slower vehicles to help avoid collisions. Designed to operate at city and motorway speeds, it uses radar and a camera to detect slower-moving and stationary vehicles ahead and provides steering support to enable drivers to manoeuvre around a vehicle if a collision is imminent

The spacious and practical KA+ and KA+ Active with room for five adults and ample luggage for the first time deliver a choice of petrol and diesel powertrains. Ford’s new refined and fuel-efficient 1.2-litre, three-cylinder Ti-VCT (Twin independent Variable Camshaft Timing) petrol engine offers 70 PS or 85 PS and delivers from an anticipated 114 g/km CO2.** Ford’s 95 PS 1.5‑litre TDCi diesel engine is designed to meet the needs of higher-mileage drivers and anticipated to deliver from 99 g/km CO2.**

Visitors to the Ford stand will also be able to pose with a life-size LEGO® Ford GT race-car driver against a podium backdrop. The 1.84 cm (6 ft) driver is made up of 67,252 bricks and took a team of seven skilled LEGO® builders 304 work hours to create.