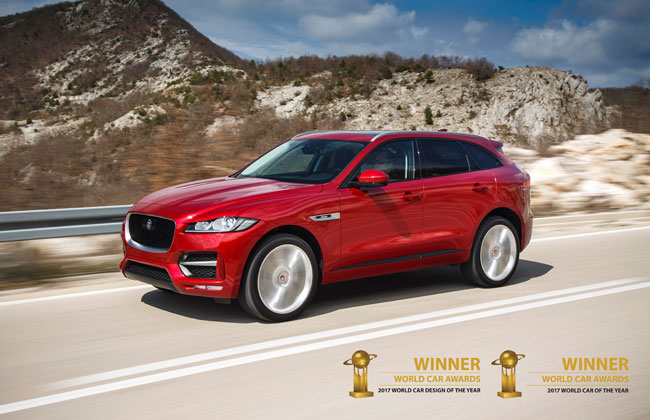 Combining award winning design, innovative engineering and now a five-star safety rating marks the F-Pace out as the ultimate family car. This result also confirms the current Pace family’s safety status following the recent award of five stars to the all-new E-Pace compact SUV.
The F-Pace features advanced safety atechnology such as Autonomous Emergency Braking with Pedestrian Detection, as standard, which can detect a collision risk with cars or pedestrians in the road ahead and automatically apply the brakes. The system performed well, scoring maximum points in pedestrian tests as well as avoiding or mitigating all of the inter-urban scenarios.
“The Jaguar F-Pace combines award winning design and engineering with exceptional safety. The lightweight aluminium intensive body of the 2017 World Car of the Year provides excellent protection alongside the dynamic performance customers expect from a Jaguar. Improvements to active safety technologies, such as Forward Traffic Detection and Driver Condition Monitoring, ensured F-PACE achieved the five-star Euro NCAP score.” says Nick Rogers, Executive Director, Product Engineering, Jaguar Land Rover
The F-Pace has become the fastest-selling Jaguar ever, with the 100,000th vehicle recently rolling off the production line in England.
The performance SUV has received more than 70 global awards, including the 2017 World Car of the Year and World Car Design of the Year titles.
The F-PACE features an aluminium intensive architecture with six airbags to create a super-strong occupant safety cell allied with a suite of advanced driver assistance systems. The combination of active and passive safety measures helped deliver an overall Euro NCAP rating of 85 per cent.