The first Gulf-branded service station in China has been opened in Guangzhou.

In May 2018, Gulf Oil International announced that it had reached an agreement to launch a national service station network in China, with the initial 25 expected to be operational within the next 12 months and with the brand aiming for 1200 stations in the coming decade. 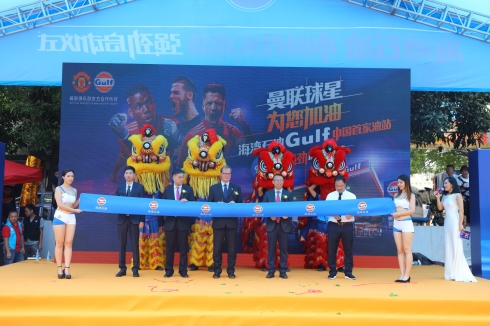 The first Gulf Station was unveiled in Guangzhou on Friday September 7, with Tobias Tasche, Vice-President of Operations and Technology for Gulf Oil International, and Arthur Liu, General Manager of Gulf Oil China, attending.

Manchester United legend, Dwight Yorke, was also present to cut the ribbon. The partnership with the football club has accelerated Gulf’s entry into China’s service station market and is testament to the strengths of the two world-renowned brands.

The new fuel retailing network is a joint venture between Gulf and Beibei Energy, with the move being the next logical step for Gulf Oil China, following substantial sales of its lubricants and the rapid expansion of Gulf’s lubricant distribution network in China during the last three years.

“The opening of Gulf’s first fuel station in China is a milestone for Gulf Oil China,” commented Arthur Liu, General Manager of Gulf Oil China. “This shows that Gulf is committed to further develop the business map of Gulf in China beyond its lubricant business. Gulf Petroleum plans to establish 1000-1200 branded fuel stations in China within the next 10 years.”

“Gulf and Manchester United have been working together for more than two years now and, from the outset, the company’s commitment to China was clear. Bespoke Gulf and Manchester United events in Shenyang, Qingdao and Zhengzhou, coupled with a strong Gulf presence at the popular #ILOVEUNITED match screening events held for Chinese fans, have demonstrated a significant level of engagement with our fans in China.”

“With over 100 million Manchester United followers in China, Gulf’s partnership with the club is stronger than ever and we look forward to expanding it further through these exciting new service stations.” Added Arnold.

“I am delighted to be part of this landmark opening for Gulf,” said Gulf Oil International’s Tobias Tasche. “Gulf has a special place in the history of fuel retail – in fact, the Gulf brand was responsible for the world’s very first drive-in fuel station. The stations we will be opening in China will be the same as the Gulf service stations in the rest of the world, providing car owners with one-stop services, such as refueling, lubricating oil, maintenance, servicing, car washes and sales of automotive products that reflect Gulf’s special place in the culture of the automobile.”