FAI Automotive has attended a dinner at the opulent Woburn Sculpture Gallery, where HM Lord-Lieutenant of Bedfordshire Helen Nellis presented the Queens Award for Enterprise to Managing Director, Sean Walker.
The Queens Award is the UK’s most globally acknowledged business accolade, only awarded to qualifying companies able to demonstrate the strict sales requirements and corporate responsibility that you would expect from such a high-profile recipient.

After the formal ceremony and a speech made by the Lord-Lieutenant of Bedfordshire, Sean Walker gave a rallying speech which included the announcement of FAI’s continued commitment to charitable organisations.
A round of applause rung out in the dining hall when directors informed the audience of over 100, that a sixty-thousand-pound gift was to be split between four charities; Cherry Lodge Cancer Care, Scotty’s Little Soldiers, Shelter and Blesma – organisations working tirelessly to support families suffering loss and hardship. 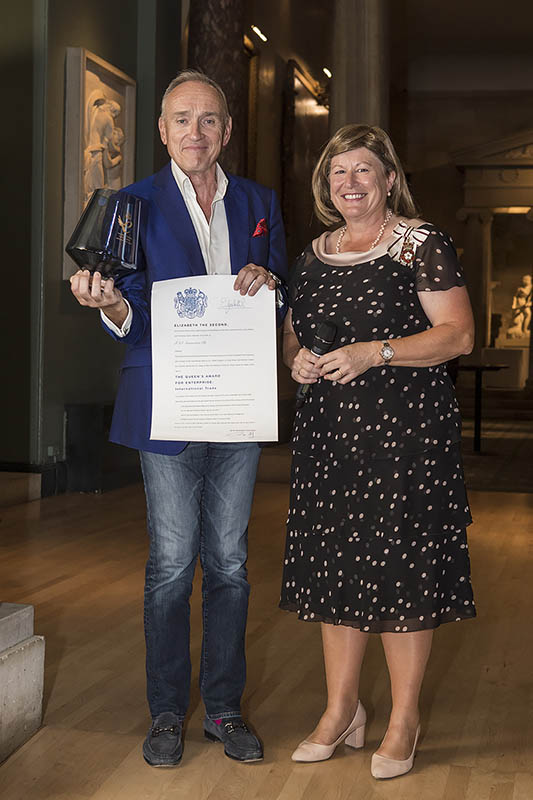 The directors of FAI also took time to celebrate the many long-standing members of staff, along with specific staff who have significantly contributed to the winning of the Queens Award.

“It was an honour to receive the Lord-Lieutenant of Bedfordshire, who made all around her immediately at ease. I had the privilege of her company throughout dinner, where her knowledge of the business world, especially that of Bedfordshire’s rich network of companies made for fascinating conversation”, said Managing Director, Sean Walker.

“The award ceremony was a proud moment, made ever-more special by the whole workforce being in attendance; after all it’s a result of all our hard work”.
“All this can only be achieved with the support of our loyal customer base, from which our success stems from.” Walker concluded.

HM Lord-Lieutenant of Bedfordshire Helen Nellis said: “I congratulate FAI Automotive on this outstanding achievement. It was clear at their Queen’s Award celebration party held at the glorious Sculpture Gallery, Woburn, that there is an enthusiastic and innovative culture within their loyal staff and a determination to build on this success”.