The European automotive industry continued its strong start to 2018, with volume up by 4.2 per cent in February as 1.16 million cars were registered, 50,000 more than in February 2017. The results mark the highest February volume since 2008, when 1.19 million cars were registered, as well as constituting the highest YTD volume since 2008, with 2.44 million units registered in Europe in 2018 so far.

This growth can be attributed to key markets such as Germany, Spain and France, as well as five other markets (Croatia, Greece, Hungary, Estonia and Luxembourg), which posted double digit growth. However, the performances of these markets offset volume declines in 13 other European markets. This suggests that future growth for the industry could be dependent on fewer European countries than previously. SUVs were a key driver of growth in February, with the volume of vehicles registered up by 24.7 per cent compared to the same month last year, meaning SUVs accounted for 33 per cent of the total market in February. In contrast, the rest of the segments combined recorded a significant decline in volume of 3.6 per cent. 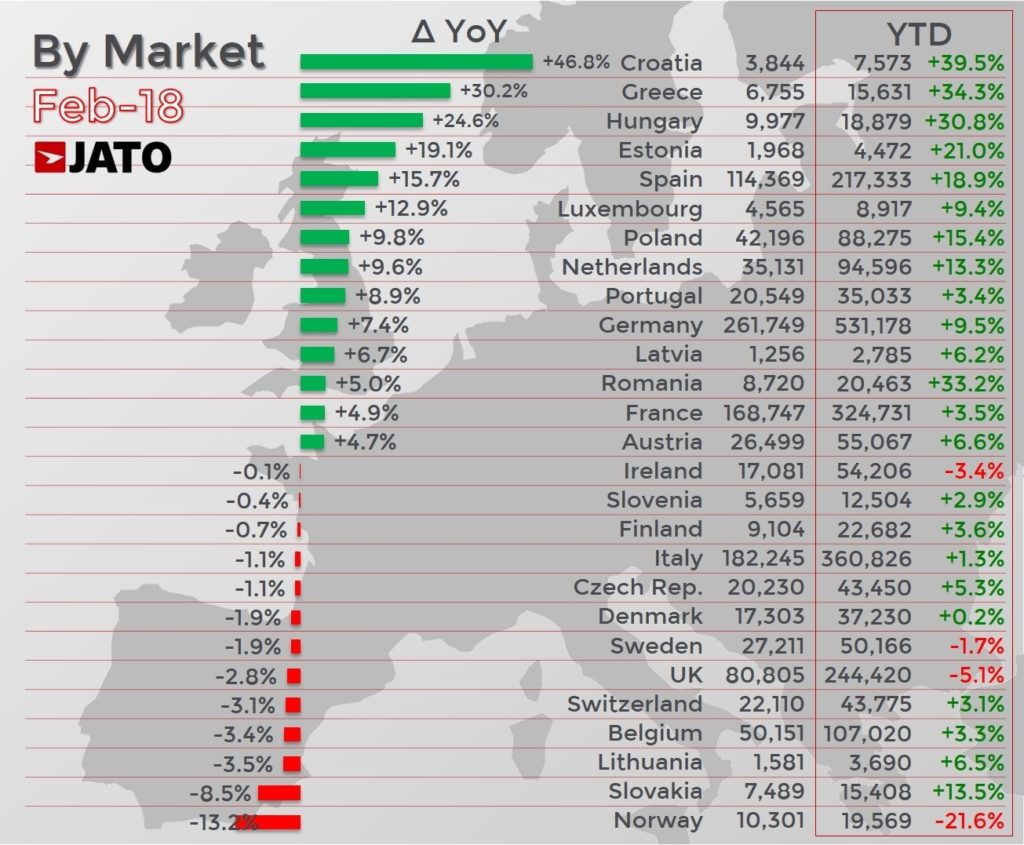 “This increase in volume for February is very encouraging and follows strong results for January, indicating that the European car industry could continue to grow in the coming months. However, 13 of Europe’s 27 markets posted declines in February, so future growth for the industry could become dependent on a select few markets,” commented Felipe Munoz, JATO’s Global Analyst. “Diesel continues to decline and its market share fell to 39.5 per cent, with volume falling by a significant 12.8 percentage points in February. This was largely caused by falling demand in Germany and the UK, where diesel vehicle registrations decreased by 19.2 per cent and 23.5 per cent respectively. Demand for petrol is continuing to grow as diesel declines – petrol registrations increased by 16% in February. Alternative-Fuelled-Vehicles were also able to take advantage of the decline of diesel, growing by 18.5 per cent,” Munoz continued.

Demand for SUVs continued to rise, with the segment’s volume up by 24.7 per cent to 382,600 units, a record level for February. This meant that one in every three cars registered in February 2018 was an SUV. Small and mid-size SUVs led the growth for the segment in February, whilst compact SUVs also had a strong month. This offset a fall in demand for full-size and luxury SUVs, which posted a 12.6 per cent decline in volume. The trend for diesel registrations declining and increases in SUV registrations, combined with rising petrol registrations, follows the recent news that CO2 emissions increased by 0.3 g/km in 2017.
This overall volume growth of SUVs can be attributed to OEMs increasing SUV ranges to meet consumer demand. VW Group, which has launched several new SUVs, saw its SUV registrations increase by 37.7 per cent to 68,700 units, placing it behind Renault-Nissan, which continues to enjoy the largest market share of the segment.

PSA experienced strong growth in the SUV segment, increasing its registrations of SUVs by 80.3 per cent in February 2018, with a total of 67,900 SUVs registered. Hyundai and Kia also increased market share in the segment due to the strong performances of the Kona and Stonic SUVs.

The subcompact segment’s registrations remained stable as decreases posted by Renault and Volkswagen were offset by increased registrations from Ford, Peugeot, Citroen and Skoda. The compact segment was the third largest in terms of market share, but volume fell by 2.4 per cent, mainly due to a decrease in registrations of this vehicle type for Opel/Vauxhall and Peugeot. MPVs saw market share decline by 2.1 percentage points, caused by the increasing popularity of SUVs.

Overall, VW Group had another solid month, increasing its market share from 23.1 per cent to 24.3 per cent. This was due to the performances of its SUV range and its compact cars, which accounted for 24.4 per cent and 27.4 per cent of its total registrations respectively. Due to its SUV range, which is now its largest segment, PSA also experienced growth. 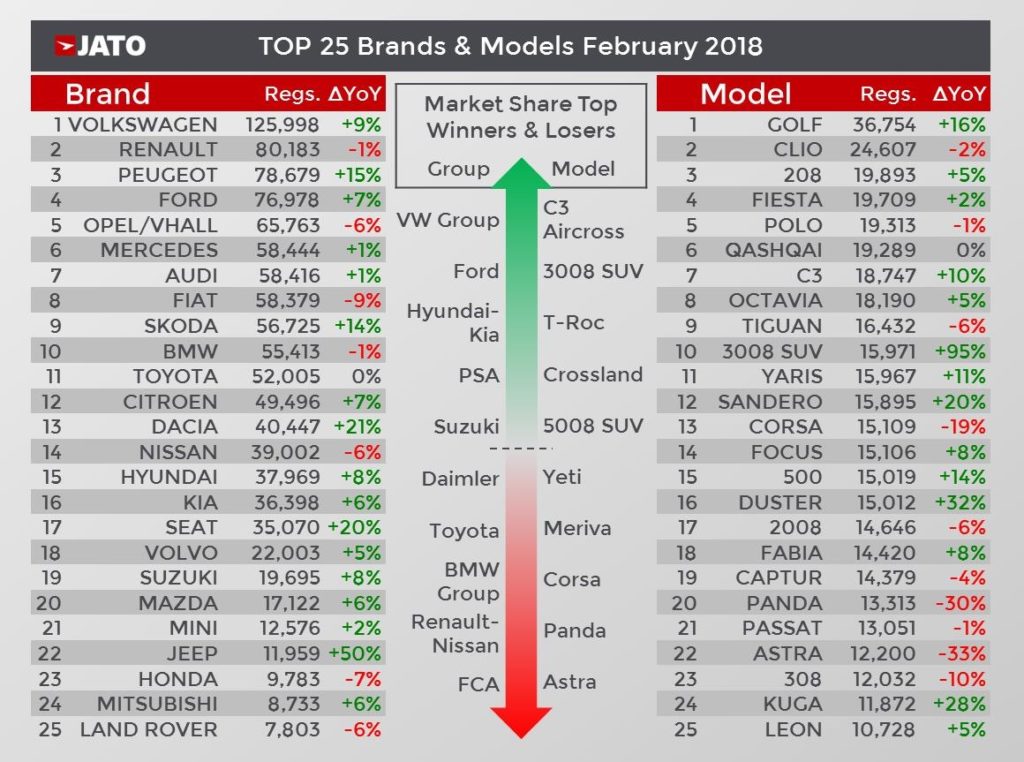 The Golf held on to the top spot, increasing its volume by 16 per cent. The Clio remained the second most popular car in Europe, but saw its volume decrease by 2 per cent. The Peugeot 3008, Peugeot 5008, Citroen C3 Aircross, Opel Crossland and Opel Grandland SUVs all contributed to PSA’s increased market share.

The Kuga and Ecosport also had strong months, with registrations up by 28 per cent and 67 per cent respectively. Both models boosted Ford’s market share. Likewise, the new Hyundai Kona and Kia Stonic accounted for 12 per cent of Hyundai-Kia total registrations. BMW’s market share declined by 0.3 percentage points as a result of the volume of the 3-Series declining by 28.8 per cent.

The Sandero and Duster had good months, increasing their volume by 20 per cent and 32 per cent respectively. Meanwhile, the 308, Astra, Panda and Corsa all had bad months, with their volume decreasing by double digits.