For the 20th year in a row, a team of Enterprise Rent-A-Car employees dressed as Santa, his reindeer and elf helpers will again bring joy and a lot of craic to the wards of Crumlin Hospital. The charity initiative, dubbed the ‘Toy Run’, was first started by a group of employees at Christmas-time 1999, very soon after Enterprise was established in Ireland.

Each year since then, employees across the company have fundraised and donated toys that are carefully wrapped, sorted by children’s age and packed in Santa sacks ready to be delivered a couple of days before Christmas to children who have to spend Christmas in hospital. 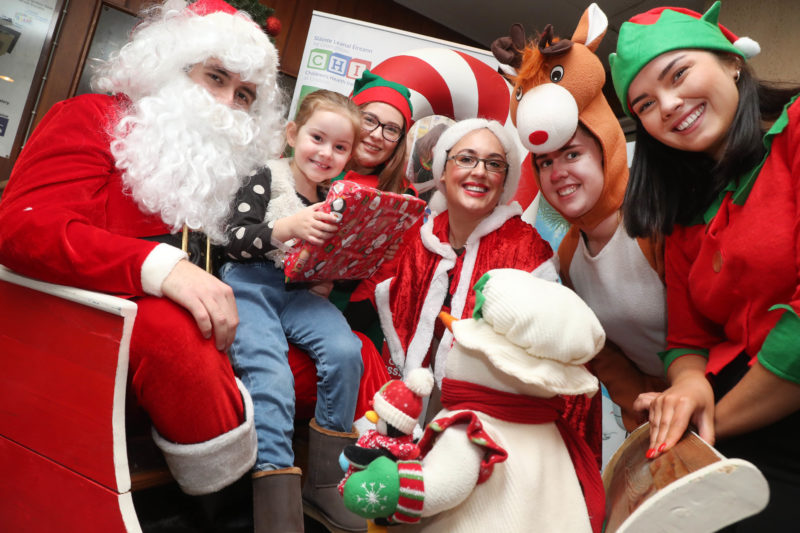 Four year old Nicole from Shankill receives a present from Santa and his helpers as part of the 20th anniversary Enterprise Rent-A-Car Christmas Toy Run in Crumlin Hospital.

Enterprise is one of only a small number of companies that are allowed to come into the hospital and to pass along the wards where some of the most seriously ill children get a chance to chat with Santa and receive a lovely Christmas present. The wards are normally out of bounds for all but the ill children, their families and hospital staff which just goes to show how much the hospital authorities value the Enterprise annual Toy Run.

Tracey Wall, director of nursing at the hospital said: “What a milestone, 20 years of the Enterprise Rent-A-Car Toy Run. That is true commitment and we are hugely thankful to all of the Enterprise staff who contribute to making Christmas special for ill children in Crumlin Hospital at this magical time of year. The excitement that the Enterprise team cause as they pass along the wards, chatting to the children and handing out presents, is a sight to behold and we hope it will continue for another 20 years.”

MD of Enterprise Rent-A-Car Ireland, George O’Connor, added: “We are delighted to celebrate 20 years of the Enterprise Rent-A-Car Toy Run. I was there on the very first Toy Run back in 1999 and ever since it is an event that really means a lot to me and the rest of our team. It takes a lot of organisation on behalf of our full team: fundraising, buying, wrapping and sorting the presents – it is a real team effort, but one that is so worthwhile.”