Multi-award winning engine decontamination specialist, EDT Automotive – now in its fifth year of trading – has expanded its workforce with the appointment of Ian Stubbs as Regional Director for Scotland and Ireland.

Ian joins the company after working in the automotive industry for nearly 40 years in varying capacities: with vehicle manufacturers and motor factors, as well as retail dealer groups.
His extensive experience means that Ian is armed with the tools required to help grow the number of garages in the EDT network, increasing EDT’s presence in open points across northern England Scotland, and Ireland.

EDT has now treated over 60,000 vehicles since the company launched, and, according to founder David Holmes, things are now gathering pace: “Ian joined at the start of the year and our first machine (in Scotland) went live just before Christmas. Since then we have had enquiries from Scottish garages who have heard about our machine and what we do.” 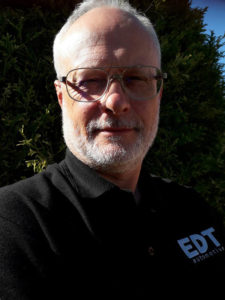 Having worked alongside EDT Automotive’s garage partners since January, Ian has found that most people’s interactions with the company have been overwhelmingly positive: “The garages I’ve dealt with are full of praise for both the product and the strong working relationship that EDT has taken the time to nurture with them. They consider us to be very open, responsive and supportive.”

This is further reinforced by EDT’s TrustPilot profile, with the company having received 131 positive reviews from garages and customers alike, achieving an impressive TrustScore of 9.8 out of 10.

Garages in the Republic of Ireland that are interetsed in hearing more about joining the EDT netowrk should contact Auto Fast Fit in Letterkenny, Co. Donegal. Telephone: (074) 912 1174