The successful rollout of the latest version of the TecAlliance data management system, referred to a DMM R2, is reaching its climax as the company’s official data suppliers have to migrate from the old system by the end of March.

The introduction has been endorsed by many leading aftermarket suppliers and in the UK, Quinton Hazell (QH) – which was launched by founder Sir Quinton Hazell, in the 1940’s and grew to become the world’s largest aftermarket car parts supplier and credited as the company that founded the independent sector – is among them.

Data quality and integrity are at the heart of the TecAlliance ethos, as access to accurate data is the foundation stone for independents, without which they would be at the mercy of the vehicle manufacturers. As TecAlliance is a major force in Asia, North and South America, as well as its European heartland, being part of the TecAlliance TecDoc data and catalogue, which is the leading global system for parts identification and repair and maintenance data, is crucial for suppliers to achieve the highest possible visibility for their brands at the point of sale for both motor factors and workshops globally.

However, managing parts data and attaining the necessary standard required for it to be easily assimilated into the TecAlliance system can sometimes be a headache for suppliers. As a result, the TecAlliance development team has used its considerable experience to simplify the integration process and designed the DMM R2 to ensure its supplier’s data is straightforward to manage and make ready for the aftermarket. 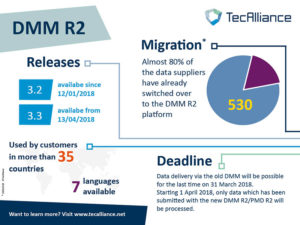 DMM R2 helps suppliers on many levels and allows them to describe their products using generic classifications and criteria to create quality data in the TecDoc standardised format. Naturally these parts can be linked to other vehicles through the use of gap analysis tools to ensure the most effective vehicle parc coverage and to identify areas where new products need to be added to the range.

Although now owned by the Tetrosyl Group, QH is still recognised and respected as one of the UK’s aftermarket ‘crown jewels’ so it is fitting that the long-standing business is among the 530 brands – almost 80% of the company’s data suppliers – that have already switched over to the DMM R2 platform.

Commenting on the introduction, Product Manager, Tania Wilson, who heads up the data management responsibilities at QH said: “We moved over to the new platform in June of last year and although I was happy with the old system, I can see the benefits and extra functionality of the new. An obvious change is the way in which to navigate, which being web-based is driven by mouse, rather than keyboard and is easy to find your way around and get to where you need to be. It is also far more intuitive and modern in feel and performance.

“Although we have not yet fully explored the options it provides, it’s clear that the system also possesses greater capability than the previous and an area we are using frequently is the reporting function, which is more comprehensive and the reporting suite and selection process make it easier to export the data, for example.

“The biggest single benefit for us though is the new validation format, which allows us to maintain individual work and validate the changes we have made on an ongoing basis, so errors can be quickly spotted and rectified. This maintains the accuracy of the data, which is central to the entire procedure and saves us time.”

When it comes to the transition process, Tania has also been impressed with the support TecAlliance has provided. “The communication and options available to aid the switch over have been good and although a knowledge of the old system is certainly helpful, the responses to our issues have been dealt with quickly and our feedback taken on board.

“The transition has also given us a glimpse of some of the options we could add to the system, such as gap analysis and support data, which would certainly help us moving to the future,” Tania concluded.

Finally, data suppliers that have yet to migrate to DMM R2 must act before the end of March, otherwise they will be unable to update their data, so please contact customer support (support.cgn@tecalliance.net) because the clock is ticking!