It was with great sadness that we received the news of the death of Duncan Richards, director of sales at European Exhaust and Catalyst (EEC).

Duncan passed away on January 27 following a three-year battle with cancer, and more recently Covid-19.

He is survived by his wife Karen, daughters Danielle and Francesca and his grand-daughter Bryony. 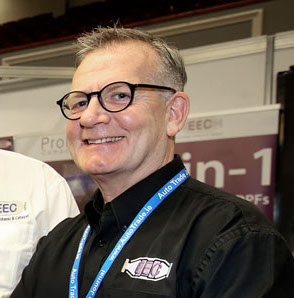 Duncan Richards pictured at the Auto Trade EXPO in 2018.

Duncan was well known and admired throughout the EEC company and the wider automotive industry.

He was also well known here in Ireland, having come into contact with many people throughout the Irish automotive industry over the years.

Duncan began his automotive career as a stock room boy in an exhaust distributor in Manchester back in the mid 70s.

Working with tireless enthusiasm and unwavering drive, Duncan soon worked his way up the ranks and enjoyed a long stint as managing director of another large exhaust distribution chain.

Following this, in 2001, Duncan agreed to join the growing catalyst manufacturer European Exhaust and Catalyst, under the leadership of John Clark. John had known Duncan back in his stock room days and subsequent management roles as he followed his career with a keen eye.

He recognised Duncan’s attention to detail, ability to build relationships with his peers and customers and an obvious knack for sales. As a result Duncan became EEC’s director of sales.

In 2011, Duncan cycled from EEC’s midlands operation in Staffordshire to the head office in Hampshire to raise money for a cancer charity that had looked after a close friend of his – 195 miles in two days.