This new data emerged after Goshortly studied the TomTom Congestion Index and identified the countries with the highest amount of low emissions zone schemes implemented to determine which of the world’s cities have the busiest roads. 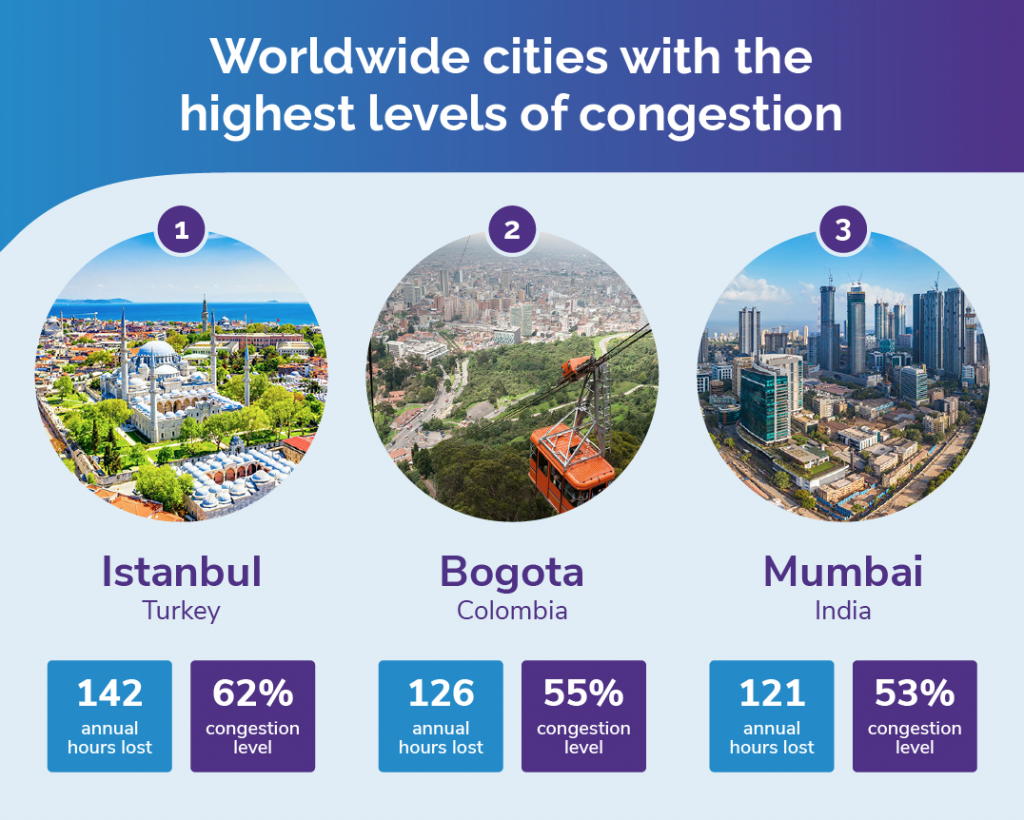 Istanbul was officially the most congested city in the world in 2021, with a congestion level of 62 per cent. That is an 11 per cent increase from 2020 and means that on average, car journeys will take 62 per cent longer.

Residents of the Turkish capital spend around 142 hours in traffic jams – the equivalent of nearly 6 whole days. Istanbul is the most populated city in Turkey and Europe, though the city technically lies in both Europe and Asia, along the Bosporus Strait.

The Columbian capital Bogota is ranked the second most congested city in the world, with Mumbai in India being in third place. 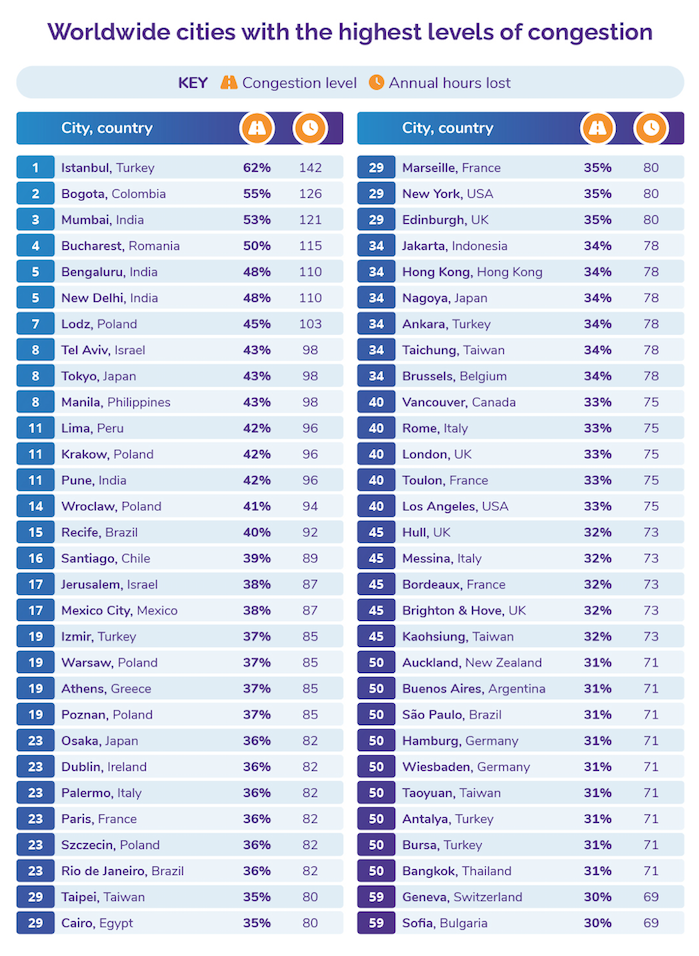 According to this new research, Belfast has the sixth highest congestion level of all cities in Britain or Northern Ireland. 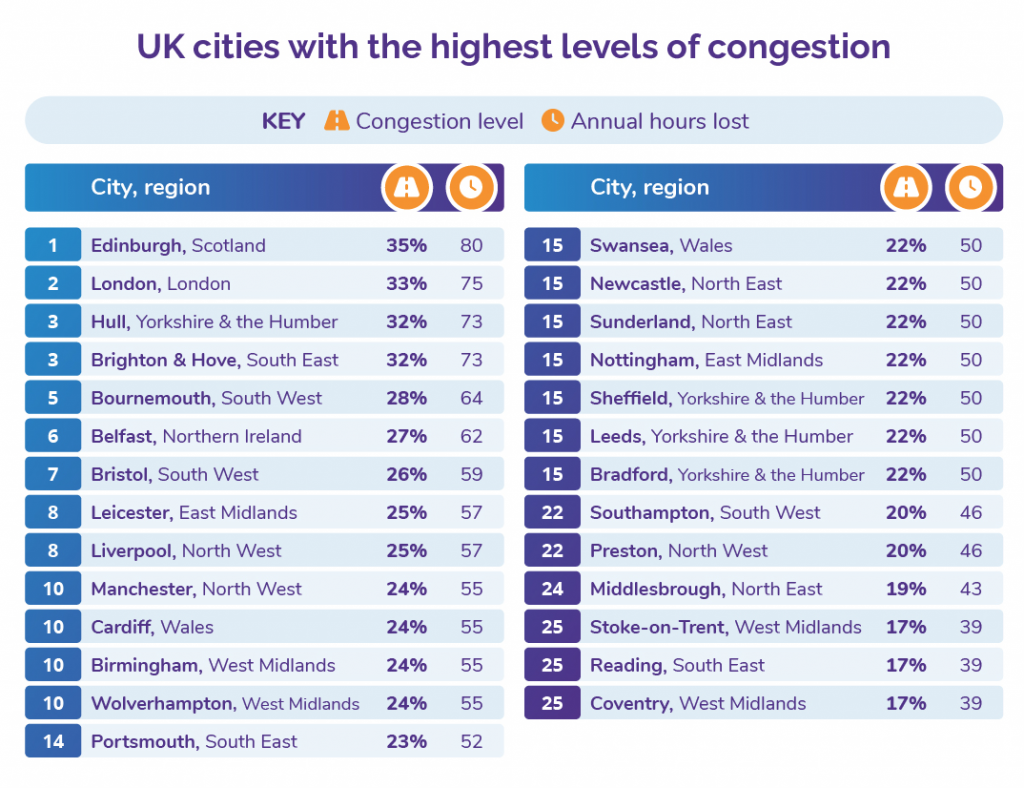 Edinburgh is the seventh-most populous city in the United Kingdom and has the busiest roads. Throughout 2021, the city’s congestion level was 35 per cent, which is a 3 per cent increase on 2020, yet a 6 per cent decrease on 2019. With the current rate continuing to increase, Edinburgh may retain the busiest roads in the UK.

Being the largest city in the United Kingdom, with a population of around 9 million, London has the second-highest level of congestion in the UK. In 2021, the English capital had a congestion level of 33 per cent, which is a growth of 2 per cent from the year before.

In the case of London, public transport can often be a slightly faster way to travel and potentially cheaper as London has congestion charges and ultra-low emission zones (ULEZ).

Hull in Yorkshire and the coastal town of Brighton & Hove tie for the third place in this anti-rating.

Italy has most low emission zone schemes, Ireland has none

Italy is also the country with the highest number of low emission zone schemes in the world, with a whopping 253 zones having implemented such schemes.

A lot of these low emission zones are found in the northern regions of Italy, as a lot of the largest cities, such as Milan and Venice, are located there.

Germany has 82
Germany is the most populous member of the European Union. Germany, as of 2022, has 82 regions that have implemented low emission zone schemes. This movement started back in 2008, with Berlin, Hanover and Stuttgart, with many other cities closely following.

UK is third with 22
The United Kingdom currently has 22 regions with low emission zone schemes, with many other cities having been ordered to implement similar schemes to tackle pollution. In 2019, London implemented its Ultra Low Emission Zone, which charges people for driving the most polluting vehicles. 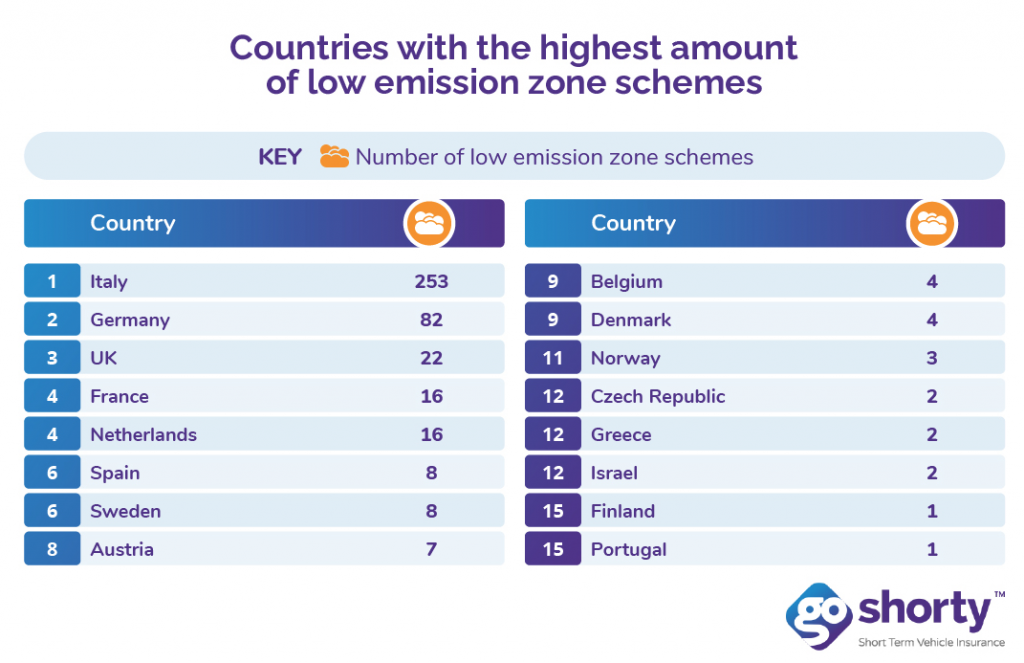 Tips to reduce your vehicle emissions

Use a cleaning agent
As your car gets older and sees more use, harmful emissions deposits can begin to build up in the engine and exhaust of your car. This can reduce your car’s efficiency, as well as increase your emissions. To resolve this, you can add a cleaning agent to your fuel or use premium fuel with these additives already in place, which may be the more expensive option.

Change your air filter
This is something that should be replaced more often, the more you drive, it can also differ based on the environment you tend to drive in. Once your air filter gets clogged, your engine’s airflow is reduced meaning it’s operating optimally. On top of this, it makes it easier for deposits to build up, increasing your emissions and potentially damaging your vehicle.

Reduce engine idling time
This can be especially challenging if you live in an area with high levels of congestion, where you’re stuck in traffic for minutes, or longer. However, if that’s the case, simply turn your engine off. According to the RAC, idling for even ten seconds wastes more fuel and causes more emissions than simply restarting your car.

Change your oil regularly
This is such a simple and yet easily forgotten maintenance task. Your engine oil is the fluid that lubricates, cleans and cools to prevent wear and damage to your car. If left unchanged, it can cause your car to run ineffectively, causing more emissions, and eventually breakdown. Check the specific oil maintenance needs of your vehicle and make sure to use the correct grade of oil.

Reduce unnecessary car journeys
This may sound rather obvious, but a car left at home in your driveway is emitting nothing. If you have to use your car, carefully consider the journey to make sure you don’t need to make multiple trips. Or better yet, if walking or cycling is an option, choose that.