The European car industry had a solid 2017, with new registrations totalling 15.57 million, an increase of 3.1 per cent when compared to 2016 and the highest volume of registrations since 2007 when 16.02 million units were registered. These strong results can largely be attributed to Eastern and Southern Europe, where volume grew by 12.7 per cent and 6.2 per cent respectively, but there is still concern over the results of the UK.

Despite the encouraging results, the issues faced by the industry including the diesel crisis and Brexit had a negative impact on growth, which slowed down to just 3.1 per cent – a decrease on the 6.5 per cent and 9.3 per cent volume growth experienced in 2016 and 2015 respectively. Disappointing results for December represented the lowest registrations for the month in five years, which indicates that the industry could be slowing down. This was exemplified by registrations of diesel vehicles, which decreased by 20.5 per cent in December 2017.

In fact, the downward trend in diesel impacted full year figures for 2017 too, with diesel volumes falling by 7.9 per cent to 6.76 million units (data excludes Hungary), accounting for just 43.7 per cent of total registrations in 2017. This is the lowest market share for the diesel segment for 10 years. Gasoline cars were able to benefit from the decline of diesel, growing by 10.9 per cent – an increase of 760,000 units. Comparatively, AFVs accounted for only 4.8 per cent of registrations, a total of 737,400 units, which was a volume change of 46.1 per cent on the previous year. These registrations were split between hybrid technology, electric and plug-in vehicles. 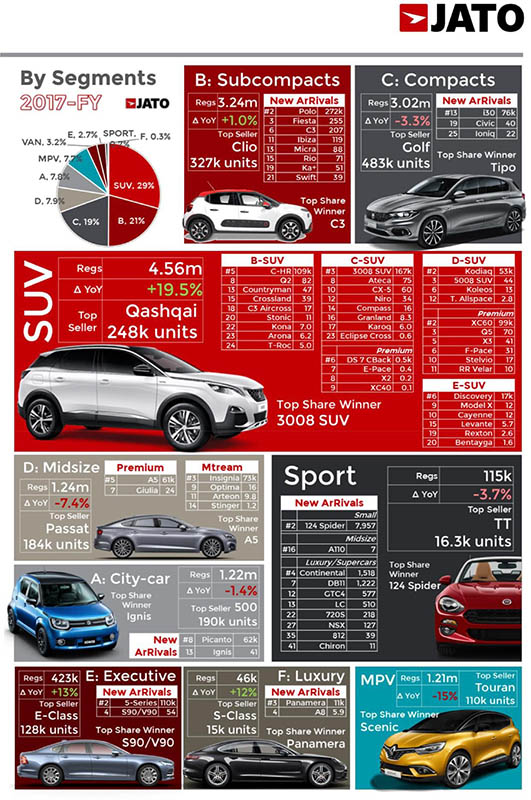 The acquisition of Opel by PSA did not help the French manufacturing group to flourish in 2017, with growth for its Peugeot and Citroen brands offset by the declines of Opel – resulting in overall growth of just 0.7 per cent . VW Group lost 0.25 percentage points of market share, but despite this it managed to increase its volume by 2 per cent to 3.70 million units. The small increase can be attributed to the Skoda and Seat brands, which increased SUV sales by 74 per cent and 254 per cent respectively.

Thanks to the C-HR and Ignis, Toyota and Suzuki were the best performing groups of the year, with volume increasing by 12.4 per cent and 20.8 per cent respectively. BMW Group was another strong performer, leading the premium manufacturers. However, the slight growth of the BMW brand meant that Mercedes-Benz was the top selling premium brand for 2017, taking Audi, who came third, off the top spot from 2016. Overall, the three German manufacturing groups accounted for 79 per cent of the premium market in 2017.