Following two consecutive months of growth, the European car market dropped in June 2019 as 1.49 million vehicles were registered – down by 7.9 per cent on the same time last year. It was the biggest monthly drop so far in 2019, as only four, including Ireland, out of the 27 markets included in JATO’s analysis posted growth but counted for a marginal 2.6 per cent of total registrations.

“June’s results confirm that conditions in Europe are getting worse. We continue to see a repeat of the same pattern: lower consumer confidence is mostly affecting diesel car registrations, which used to dominate the European landscape,” commented Felipe Munoz, JATO’s global analyst.

However according to JATO’s results, Ireland has bucked this negative trend with Year on Year (YoY) sales for SUVs increasing by 13 per cent, with only Romania seeing a bigger increase (14.2 per cent).

Figures from the Society of the Irish Motor Industry (SIMI) reveal that Ireland’s best selling SUV as of June 2019 is the Nissan Qashqai (2,874 units), followed by the Hyundai Tucson (2,793 units) and the Volkswagen Tiguan (2,272 units). 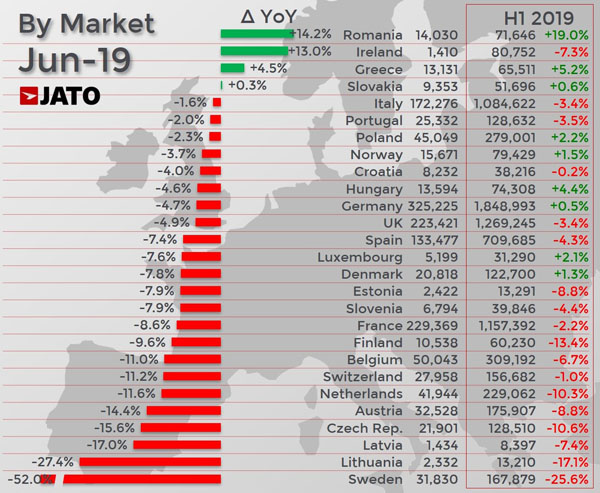 The results of diesel and electric vehicles contrast heavily across Europe. In June 2019, diesel car registrations fell by 21 per cent and made up 31 per cent of the total market, while demand for electrified vehicles increased by 20 per cent. However, the latter’s growth is still not strong enough to enable them to become a big player on the market, as they still account for just 7.5 per cent of all registrations. “The drop seen in diesel car registrations continues to be higher than the growth posted by electrified cars. In order to see a real change in their market position, electrified vehicles need to attract more consumers, or else they won’t be able to capitalise on the demise of diesel,” explains Munoz.

“But the most worrying result from June was not the continuous diesel decline, but the slowdown in demand for SUVs,” Munoz adds. SUV registrations totalled 556,400 units during the month, up by only 0.7 per cent compared to the 552,500 units of June 2018. “Although it was still the third highest month ever for sales in the segment (behind March 2018 and March 2019), there are two factors that explain the limited growth.

“The first is that the poor conditions of the wider market are finally impacting SUVs, which are usually more expensive than regular car types. The second, which is more concerning, is that SUV demand may be peaking after many years of growth. If the second explanation is true, then Europe could be losing its main driver of growth.”

Most of the slowdown in the SUV segment in June came from premium SUVs, where demand fell by five per cent as a result of double-digit drops at Mercedes, Volvo and Land Rover. Although several mainstream brands posted growth, such as Seat (+37 per cent), Dacia (+21 per cent) and Volkswagen (+19 per cent), the three most popular SUV models posted the biggest drops: Nissan Qashqai (-15 per cent), Volkswagen Tiguan (-18 per cent) and Peugeot 3008 (-18 per cent).

Toyota was a big market share winner of the month, with the new Corolla performed far better than the Auris, and the new Rav4 continued to climb the SUV rankings, hitting the top 10 mainstream compact SUVs. Along with Lexus, these brands controlled 72 per cent of the hybrid car market in June. 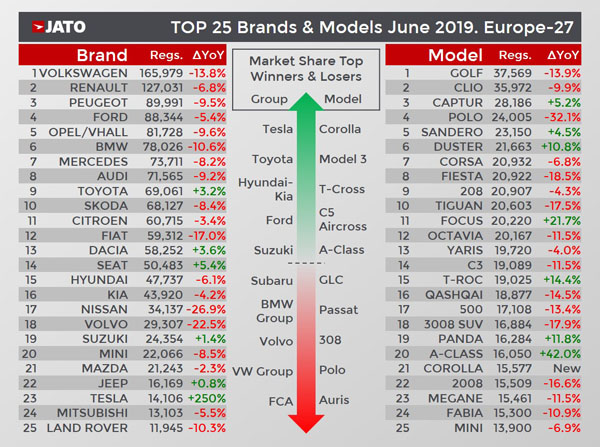 It was also a good month for the Volkswagen T-Cross, which hit the top 50 with 11,058 recorded sales, and the Citroen C5 Aircross, which recorded 7,741 sales and outsold the Mazda CX-5 and Jeep Compass. Meanwhile, the Mercedes A-Class occupied the 4th position amongst compact cars – only behind the Golf, Focus and Octavia, and the Ford Focus was boosted by increased demand in Germany, Italy and France.

The Hyundai Kona also did well in June, recording almost 8,700 sales – of which 22 per cent originated from its electric version. Elsewhere, the Seat Tarraco recorded 3,910 registrations and became Europe’s 4th best-selling mainstream midsize SUV – only behind the 5008, Kodiaq and Outlander.