Dayco is one of the world’s largest manufacturers of timing belts, tensioners and auxiliary belts, which it supplies as original equipment (OE) to vehicle manufacturers (VM’s) across the globe. With the development of its High Tenacity (HT) or ‘white belt’ Dayco has established itself as the premium OE timing belt supplier for the latest generation of high performance turbo diesel and petrol powered vehicles.

Testament to the company’s ability to develop innovative solutions in cooperation with the VM’s that it supplies, is the recognition of Ford’s 1.0 EcoBoost engine as the ‘International Engine of the Year’ in the recent Engine Technology International Magazine awards.

The awards, which are judged by 76 of the world’s most respected motoring journalists who hail from 35 countries, are held in high regard by the VM’s and the wider industry alike and the impressive engine also took the ‘New Engine’ and ‘Sub 1-litre’ awards in addition to the overall crown. 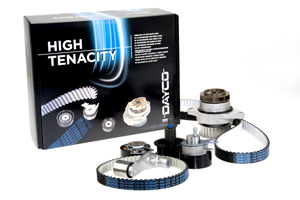 The unit, which the judges described as: “Light, neat, clever and a delight to drive,” and “embodies clever measures to ensure it’s economical in the real-world at high load, not just in the test cycle,” is due in no small part to the ability of Dayco and its team of dedicated engineers to develop a viable and effective solution to the engine’s timing control.

Dayco also supplies a similar solution for the company’s 1.3 EcoBoost unit and the HT timing belt for the multi award-winning Land Rover Evoque with the 2.2-litre diesel engine.
Dayco’s commitment to the aftermarket runs as deep as its dedication to quality, which means that there is no difference between the products it manufactures for OE or the aftermarket, so technicians can have complete confidence in the brand.

Alongside the quality of its products Dayco also recognises the importance of bringing its aftermarket products to market quickly in order that the independent sector is able to compete at every level of the repair trade. As a result it has introduced 90 new references over the last two months alone, which also puts the Dayco brand at the forefront in terms of the depth of its aftermarket product range.

Among these new additions are timing belt kits for the Kia Sedona 2.9 CRDi, Mazda 3 2.0 DiTD, Mazda 6 2.0 DiTD and the Vauxhall Insignia 2.0 CDTi.
For more information regarding the OEM quality power transmission products in the Dayco range, please email contact Team PR Reilly on 01 832 0000.