Northern Ireland’s largest car retailer Charles Hurst has plugged in to support a major fundraising challenge that will see a relay of electric vehicles travel more than 2,000 miles across the UK and Ireland.

The carbon-neutral challenge is part of an initiative developed by Charles Hurst’s Manchester-based owner Lookers plc, one of the largest retailers in the UK and Ireland and all 155 of the group’s franchised dealerships are taking part – 180 outlets in total. 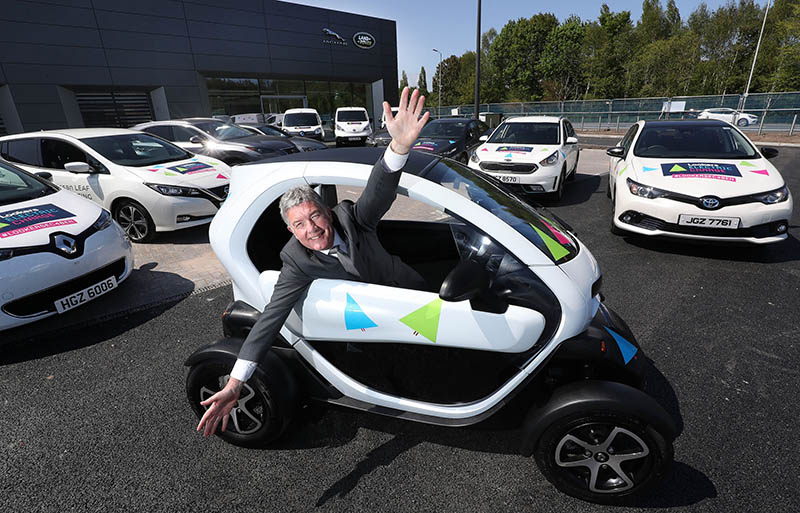 Next week, the Electric Charge relay will move across the Irish Sea to Scotland, travelling across Britain before it finally reaches Eastbourne in October.

Charles Hurst Operations Manager, Colin McNab, said: “Our fundraising challenge this year is really something to shout about.  Charging across the UK and Ireland, not only are we working hard to raise vital funds for Ben, our automotive industry charity, but this unique 2,000-mile carbon-neutral challenge will really show off what these powerful electric vehicles can do, how efficient they are and what a significant, positive impact they can make to improving our environment.”

A range of fundraising activities are planned across the 2,000-mile route, from carbon neutral days and green energy workshops to test drive events and golf days.

A total of 180 Lookers outlets will be visited as part of the initiative including the Electrification Suite at Jaguar’s Castle Bromwich facility and Ford’s iconic factory in Dagenham. While in London, the Electric Charge will also hold the ultimate showdown between electric car and bike in a first-to-the-finish race across the city.

The relay will include a number of fully electric vehicles from Lookers’ wide range, including the Nissan e-NV200 electric van, the electric Hyundai Ionic and the soon-to-be-released Jaguar I-PACE, which is being previewed by Lookers Jaguar at the London Motor Show.