Craig Breen and Paul Nagle scored their fifth win from six rounds of the Irish Tarmac Rally Championship at the weekend, to clinch the title for the first time with one round to spare.

The Waterford-Killarney pairing completed the nine stages of the Today’s Ulster International Rally based in the Newry-Banbridge area of Co. Down 20 seconds ahead of current British champion Matt Edwards and co-driver Patrick Walsh. 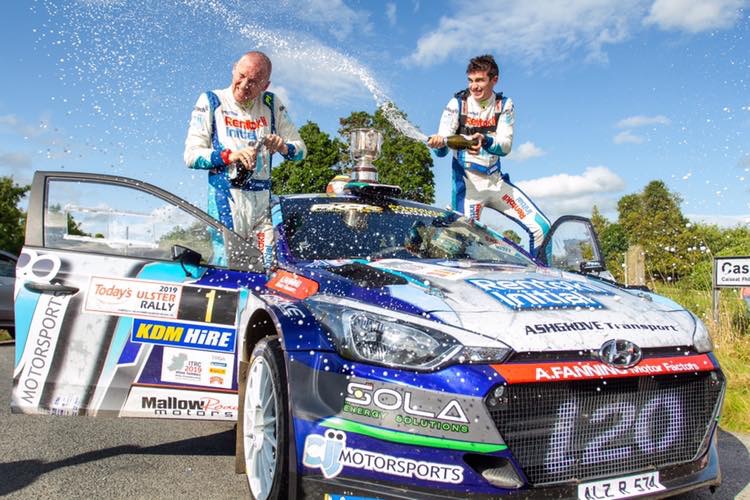 Craig Breen and Paul Nagle after securing the 2019 Irish Tarmac Rally Championship on the Ulster Rally.

The Welsh crew held second position throughout the rally, and stayed close to Breen over the opening stages, but the lead gradually increased and Edwards/Walsh never really looked as though they could mount a serious challenge.

The Southern pair’s four earlier wins were at the wheel of Ford Fiestas, but this weekend was the first time they have campaigned a Hyundai i20 in this country, following on from their recent overseas outings for the South Korean manufacturer, which culminated in seventh place in Rally Finland earlier this month, a round of the World Rally Championship.

Another impressively quick drive from Callum Devine landed the Derry driver with his third podium finish of the year, with the former Young Rally Driver of the Year less than a minute behind the winners at the finish in his Fiesta.

Among the retirements were Monaghan’s Josh Moffett, who rolled on the third stage, and British title contender Tom Cave, who also went off the road on the penultimate test.