Federal-Mogul Motorparts is set to be the official supplier of steering and suspension components to the NASCAR Whelen Euro Series™ for the second year.

Following an enthralling 2017 series, MOOG, the company’s chassis brand, is providing key components for each team competing in the European series, which raced at Brands Hatch over the weekend of 9 and 10th of June.

In Elite 1, Rounds 5 and 6 thrilled spectators at the historic track. Frederic Gabillon won Round 5 and Gianmarco Ercoli took Round 6. The fifth-round win, together with the sixth consecutive top-5 of the season he scored on Sunday, gave Gabillon the title ‘King of Brands Hatch’ and the championship lead by 26 points, bringing his total thus far to 210.  Ercoli became the first Elite 2 Champion to win a race in Elite 1 Division. Rookie driver, Alex Sedgwick provided the British interest with impressive finishes in both rounds.

In the always unpredictable Elite 2 Division, spectators were provided with an equally exciting weekend of racing. Guillaume Deflandre for Memphis Racing and Florian Venturi from Go Fas Racing claimed the two victories, bringing up to 5 the number of different race winner in the first six rounds of the season. With an impressive performance in the British weekend, 17-year-old Venturi earned the title ‘Prince of Brands Hatch’. 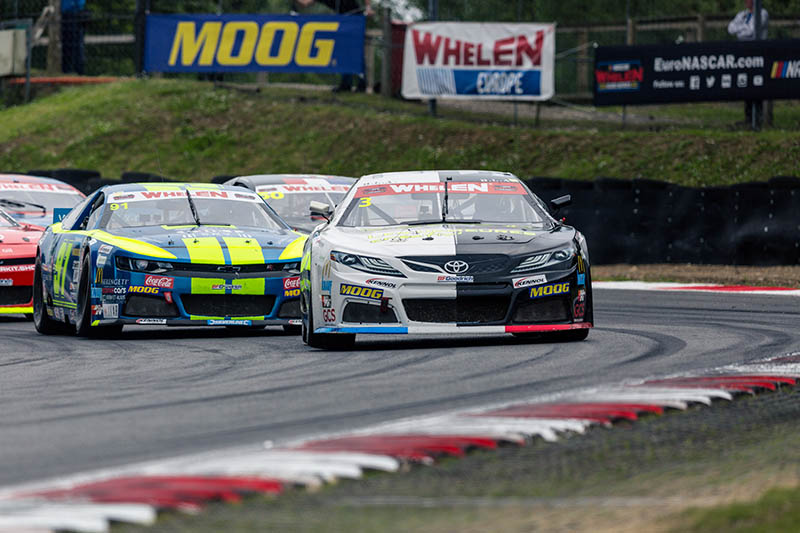 “It was a fantastic weekend where a crowd in excess of 45,000 enjoyed great weather, superb racing and off the track, an incredible display of Amercian cars,” said Jonathan Allen, Regional Marketing Manager UK, Federal-Mogul Motorparts EMEA. “I would like to thank all our VIPs and competition winners, from those I was fortunate enough to meet and speak with, I was told it was a great experience. I’m also grateful to former US NASCAR® Champion, Bobby Labonte who took time out of his racing schedule to meet our guests and sign memorabilia.   For the customers in attendance, MOOG’s partnership with the series was the perfect way to demonstrate how robust and reliable its steering and suspension components are. Motorsport is a far more brutal test than anything these parts experience during normal day-to-day driving, it inspires great confidence.”

Several promotions and competitions were run in the UK during the lead-up to the races over the weekend. Prizes ranged from merchandise and hospitality tickets through to the grand prize: a trip to see the NASCAR® in the US.

The EuroNASCAR® series has only been in operation since 2012 and its following grows year-on-year. Five new teams have joined the championship for the 2018 series, alongside high-profile driver recruitment, such as NASCAR legend Bobby Labonte and Cycling World Champion bicycle racer Tom Boonen. With only two more rounds before the playoffs begin, the action is sure to intensify.