With COVID-19 causing global motorsport to grind to a halt, International Rallying resumes this weekend in Italy with Rally di Roma where there will be no fewer than eight Motorsport Ireland licence holders taking part. 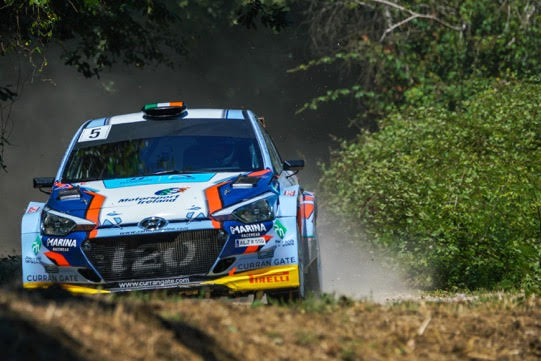 Callum Devine and Brian Hoy testing on Tuesday ahead of Rally di Roma.

The opening round of the 2020 European Rally Championship has attracted a highly competitive entry and full-time professionals Craig Breen and Paul Nagle will be aiming to perform well as they develop tyres for Indian firm, MRF. Breen will pilot a Hyundai i20 R5 and will be buoyed by the recent announcement that he has been nominated to drive for Hyundai on Rally Estonia as the World Rally Championship prepares its restart.

Another driver with Hyundai links is Callum Devine. The Derry driver and reigning Motorsport Ireland International Driver of the Year is part of Hyundai Motorsport’s Junior Driver initiative and will also pilot a Hyundai i20 R5 on the event partnered by co-driver, Brian Hoy. Callum, like Breen, will compete in the full European Rally Championship this season and he is being supported by the Motorsport Ireland Rally Academy.

There is further Motorsport Ireland Rally Academy representation in car 49 with William Creighton entered in his Ford Fiesta, which has recently been upgraded to Rally4 specification. Creighton had planned on competing on the British Rally Championship this season, but with that series now cancelled, he has decided to venture to Italy to prove himself against the best young talents in Europe. One driver tipped for the very top of the sport is Oliver Solberg, son of 2003 World Rally Champion, Petter. Solberg will be partnered by Motorsport Ireland licence holder, Aaron Johnston.

The remaining Irish interest in the event is Pauric Duffy and Jeff Case. The pair will run in the same PCRS team as Callum Devine for the weekend and will also be in command of a Hyundai i20 R5.

Rally di Roma Capitale will begin today (Friday July 24th.) with pre-event practice and shakedown before the event properly gets underway on Saturday which will see the crews tackle six stages before a further nine stages on Sunday conclude the event. The competitive mileage of the event will come in at just under 200km, as it operates a very strict COVID-19 policy, with restrictions on spectators as well as all registered personnel.

Straight after Rally di Roma, several crews will head North to take part in Rally di Alba the following weekend. Breen, Nagle, Devine and Hoy are entered as part of their commitments to Hyundai but they will also be joined by current Billy Coleman Award holder Josh McErlean, and former Billy Coleman Award winner Josh Moffett, who are both entered in their respective Hyundais for the event.

Speaking ahead of Rally di Roma, Motorsport Ireland Rally Academy Manager, Sean McHugh said; “It is great to have Academy representation on Rally di Roma and Rally di Alba and it’s also great to continue to develop our working relationship with Andrew Johns of Hyundai Customer Racing. During the lockdown we have worked hard at keeping the Academy members active and engaged and I’m sure the guys will be able to hit the ground running now that the sport is starting up again. Aside from that, it’s brilliant to see such strong Irish representation overall on these events.”