Rolls Royce Silver Ghosts are rarely offered at public auction. Well the independent auction house, Historics at Brooklands is about to offer the epitome of elegance, and it is anticipated to command offers in the region of £450,000 to £550,000 at auction on September 1st. Irish bidders need to keep an eye on the latest Euro – Sterling exchange rates, but I suppose if you’re bidding for a car like this, what’s an extra ten thousand Euro here or there. 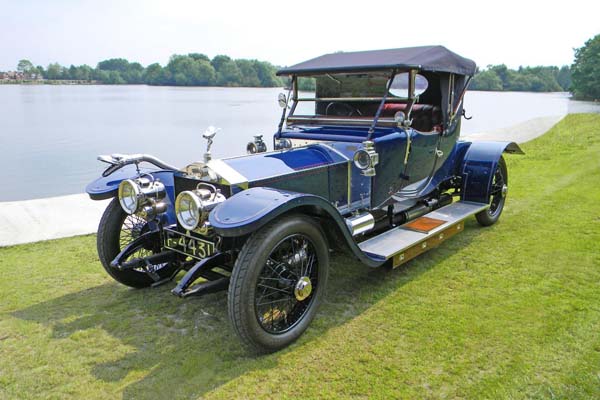 What an amazing history
Arguably the most famous luxury car in history, and still the most desirable pre-war veteran amongst collectors, the Rolls-Royce Silver Ghost was designed to showcase the highest level of engineering skill alongside an unrivalled passion for quality, and became known as the ‘Best car in the world’.

Awarded the title by Autocar magazine in 1907 – following its launch to great acclaim at Olympia in 1906 – the 40/50hp gained the ‘Silver Ghost’ moniker from members of the press in recognition of its serene presence, with auctioneer Historics at Brooklands bringing an example with such spirit to its autumn sale.

Chassis 1557 was built in 1911, the same year a Silver Ghost completed an entire run from London to Edinburgh and back in top gear, and with a fuel consumption of 24 mpg, highlighting Rolls-Royce’ renowned marriage of power and legendary reliability.

The car was delivered on 1st April 1911 to Sir Adolph Tuck of London, whose father founded the company Raphael Tuck & Sons, selling prints and postcards during the ‘postcard boom’ of the late 1800s and early 1900s.

Originally fitted with a Landaulette body in order to be chauffeur driven, the motor car was latterly re-bodied as a period two-seat tourer by Rippon Brothers Ltd., who are widely considered the oldest coach building company in the world, having built a coach for the Earl of Rutland in 1555, and a ‘chariot throne’ for Queen Elizabeth I in 1584.

Producing bespoke bodies for numerous Rolls-Royce models right up until 1959, Rippon Brothers Ltd. won the coveted ‘Coachmakers Cup’ at the London Motor Show on a number of occasions, including eight successive titles in the 1930s, demonstrating their shared belief of the Rolls-Royce ideals.

Chassis 1557 boasts an equally impressive award winning history, and in 1977 attended the Queen’s Jubilee parade through Windsor Castle to the Silver Ring at Ascot Race Course.

More recently a complete nut and bolt restoration was commissioned in 2001, with the painstaking 12-month process resulting in a finish of the highest possible standard.  Subsequent Concours prizes at annual Rolls-Royce Enthusiasts Club rallies attest to its quality.

Complete with Acetylene head and side lamps, Boa Constrictor horn and a complete original tool kit under the passenger side running board, #1557 is coach-painted in dark blue, with red coachlines matching that of the opulent red leather interior.

Viewing at Brooklands will be on Friday 31st. August from 10am – 8pm, with offers welcomed on the day in person, via commission or telephone bids, or indeed online via www.i-bidder.com.