KYB UK will be exhbiting its market-leading products at AutoMechanika in Germany on September 11-16.
Read More
Speakers and delegates from all over the world gathered in Dublin recently to attend Fully Charged 2012, an International electric vehicle summit organised by ESB
Read More

The LuK clutch range has been expanded in a move that has resulted in an extra quarter-of-a-million vehicles covered by the market-leader. Ten new part
Read More
Toyota Ireland has extended its with Munster and Ireland rugby hero Paul O’Connell until 2015. The 85 time capped Irish Rugby international, who has opted
Read More
Gowan Distributors Limited, the importer of Peugeot vehicles, parts and accessories in Ireland has appointed Geraldine Browne to the position of Sales Development Manager.
Read More
Volkswagen Ireland says it cannot guarantee sunshine this July and August but it can guarantee savings, providing every new Volkswagen customer with a welcome cheque
Read More
Kia Motors Ireland are sending a fleet of Sportage and Optima Models  to London to help Team Ireland with their logistics for the Olympic Games
Read More 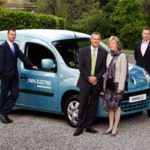 The French Embassy in Dublin has taken delivery of a new 100 per cent electric vehicle, the Renault Kangoo Z.E. The embassy purchased a new
Read More
While factors using the TecDoc CATALOG electronic parts catalogue are already used to the simplicity of the search criteria and the speed with which the
Read More

Team PR Reilly is warning the trade to be on the look out for fake Valeo clutch kits that have surfaced on the market.
Read More