The European Parliament has voted in favour of a 40 per cent reduction in carbon dioxide (CO2) emissions from passenger cars and vans by 2030. 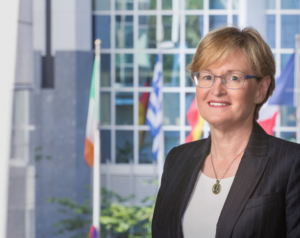 The Parliament also set an interim target for a 20 per cent emissions cut by 2025 and is calling for 20 per of vehicles to be electric and hydrogen-powered by 2025, increasing to 35 per cent by 2030.

Mairead McGuinness MEP and First Vice-President of Parliament has welcomed the vote. Speaking from Strasbourg, McGuinness said that increased ambition to cut CO2 emissions for passenger cars is very important and an area of concern to the public. The Midlands North West MEP and Member of the Parliament’s Environment Committee added: “While the Commission proposal went far, the European Parliament’s position goes further in the fight against climate change.”

“CO2 is the most common Greenhouse Gas (GHG) and emissions from the transport sector account for 23pc of Irelands total emissions.

“Ireland has very onerous targets under the Paris Climate Change Agreement and the transport sector must do more to ensure we can meet these objectives. This proposal will encourage the car industry to innovate, develop alternatives and improve fuel efficiency.

“There is already a strong focus to reduce emissions coming from the agriculture sector and other sectors will have to make efforts to reduce their climate impact as well,” she said.

CO2 emissions coming from the Transport and Agriculture sectors are counted together under the Effort Sharing Regulation along with emissions from the buildings & waste sectors.

In Ireland, Transport and Agriculture together account for 75pc of the emissions.

This vote benefits the agriculture sector as the significant CO2 reductions necessary to meet our climate targets cannot be borne by agriculture alone and ambitious reductions in the transport are crucial, according to McGuinness.