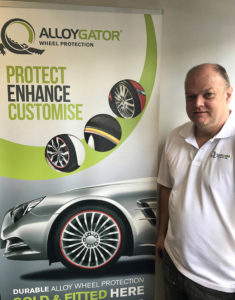 AlloyGator is based in the West Midlands and its latest appointment further demonstrates its plans for continued growth, especially following the success of its ‘exclusive’ AlloyGators designed for larger wheels.

Lee, who boasts an extensive career in operational roles in various industries, said: “It’s an exciting time to join AlloyGator as it is enjoying sustained expansion across the UK and overseas.

“Although I’ve only been with the firm a short while, I’ve been very impressed with their product range and the operational systems already in place, although I do have a few plans of my own to streamline systems even further.”

Lee’s appointment at AlloyGator in the newly created position of operations manager comes in a busy period for the Redditch business, as it has also just appointed a new sole distributor in Scotland to strengthen its position north of the border.

Stephanie Rathbone, operations director at AlloyGator, said: “Lee has a wealth of operations experience and will be a great asset to AlloyGator. I’m looking forward to working closely with him and I’m sure his future input will be a massive benefit to AlloyGator, plus our distributor and fitter network.”
Lee, 51, lives in Redditch and is married with two children. He has a Level 1 football coaching badge gained at Redditch United FC and also enjoys playing golf.
Meanwhile, for further information about AlloyGator, visit www.alloygator.com