The all-new Seat Arona will go on sale here in November with a starting price of €17,995 entry-level spec 1.0TSi 95 hp S model

The all-new Arona is SEAT’s first model in the A0 compact crossover segment, which is the fastest growing segment in Ireland. 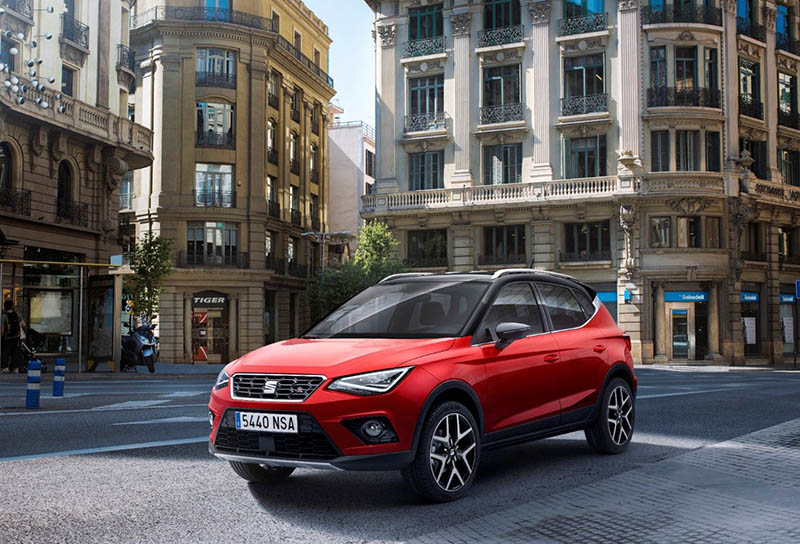 The new Arona is the brand’s third new model release in 2017, after the upgraded Leon and the all-new Ibiza. This is yet another addition to the SEAT range in its biggest product offensive ever, which also includes the Ateca and the upcoming large 7 seater size SUV that will be released in late 2018.

Seat says that the all-new Arona sits neatly within the SUV range as the younger brother in the family, and it combines the advantages of its compact dimensions in the city with its crossover attributes to get out of the city and go even further.

It adds that the new Arona has all of the driving assistance and infotainment systems you know and love from other Seat models.
In terms of connectivity, the Arona features Apple Car Play, Android Auto and Mirror Link. And in the sound department, it features optional BeatsAudio with 6 premium speakers, a 300W 8-channel amplifier and a subwoofer in the boot.

Like other models in the range, it offers S, SE, FR & Xcellence trims. The dual-coloured (red and white) ambient indoor LED light and dual-zone climate control with an aircare filter are also available on the Arona, while at the front of the car, the triangular headlights with its attractive colour and excellent luminance make the new Arona instantly recognisable.

Seat Ireland says that to simplify the process of outfitting the new SEAT Arona, the optional equipment is grouped into packages.
Strength nowadays lies in efficiency and reliability. All of the engines available in the new Arona range have direct injection, a turbocharger, and feature an automatic stop & start system.

There are three different petrol engines to choose from, all with an aluminium block. The first is the 3-cylinder, 95 PS 1.0 TSI, which is linked to a five-speed manual gearbox. Also available is this same engine but in a 115 PS version, which comes with a six-speed manual gearbox or the dual-clutch seven-speed DSG transmission.

The third is the new four-cylinder, 150 PS TSI with active cylinder disconnection technology, which is exclusive to the FR trim and is connected to a six-speed manual gearbox. As for diesel options, the efficient and reliable 1.6 TDI will be available with 95 and 115 PS. The 95 PS version can be paired with a five-speed manual transmission or the seven-speed DSG, and the 115 PS with a six-speed gearbox.