Following on from their recent Open Week in dealerships where it showcased the range of Volvo Cars, the opportunity to test drive the new Volvo S90 continues. The all-new S90 is now available with a D3 150hp engine with prices starting at €43,900.

The S90 is the latest model to be built on Volvo’s all-new Scalable Product Architecture (SPA) platform and benefit from Volvo’s ground-breaking Drive-E powertrains. Like the XC90 before it, It features the new face of Volvo, including the T-shaped LED headlights that make them instantly recognisable. 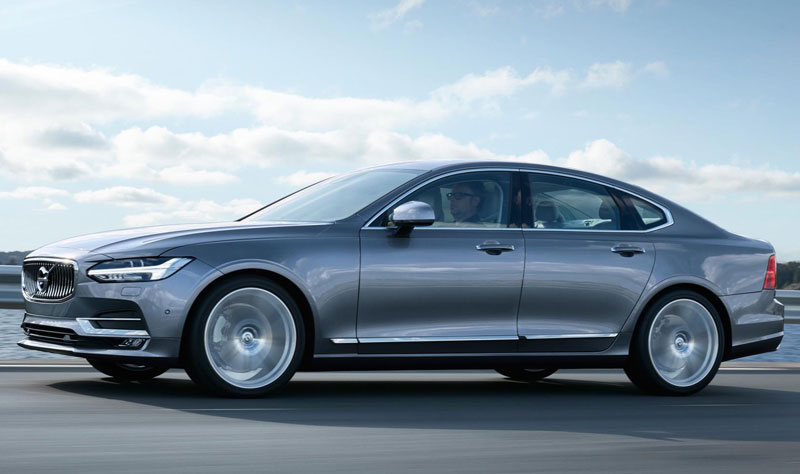 The S90 is available with a choice of two 2.0-litre, four-cylinder diesel engines – the fuel-efficient D3 and D4 and the powerful and refined D5 PowerPulse – and in three trim levels: Momentum, R Design and Inscription.
The newest engine to be released at the factory is the front wheel drive 150 hp D3 which offers combined fuel consumption of 64.2 mpg and CO2 emissions of just 115 g/km in the S90. Pricing on the D3 engine starts at €43,900* (delivery and related charges not included).

The front-wheel-drive 190 hp D4 comes is available with an eight-speed automatic gearbox, and offers combined fuel consumption of 64.2 mpg and CO2 emissions of just 116 g/km in the S90.

The 235 hp D5 utilises an innovative technology called PowerPulse to boost responsiveness. This uses compressed air, which is stored in a tank in the engine bay and refilled automatically, to spool up the turbo at low revs. This helps to overcome turbo lag, which is the short delay in the power delivery you experience in traditional turbocharged engines. To harness the engine’s power, the D5 PowerPulse comes with all-wheel drive. An eight-speed automatic gearbox is also standard.

Volvo says that every version of the S90 is luxuriously equipped. As standard, even entry-level Momentum cars come with leather upholstery, LED headlights, two-zone climate control with ‘CleanZone’ air-filtration system and automatically dimming mirrors both interior and exterior

Volvo’s Sensus infotainment system is also standard. This brings a 9” touch screen, satellite navigation (including lifetime annual map updates), a sophisticated voice-control system, and access to the internet and a range of cloud-based apps such as TuneIn, Stitcher and Yelp.

Pilot Assist, Volvo’s innovative semi-autonomous drive feature, is standard on every S90. It automatically keeps you at a set speed or distance from the vehicle in front, braking and accelerating with the flow of traffic, and gives gentle steering inputs to keep the car within lane markings at motorway speeds up to 130kph. Unlike previous versions of the system, it no longer needs to follow another car. Pilot Assist is another step towards fully autonomous driving.

The latest version of City Safety is also fitted to every S90. This includes automatic emergency braking with pedestrian and cyclist detection, and the world-first application of large-animal detection. This feature helps to avoid or limit the severity of collisions with large animals such as deer or horses both at night and during the day.