The new Velar is fourth member of the Range Rover family and it has just gone on sale here, with an entry-level price of €62,240 plus delivery and related charges. It fills the space between the Evoque and the Range Rover Sport.
It is a mid-size luxury SUV that Land Rover delivers new levels of refinement, elegance and technology. 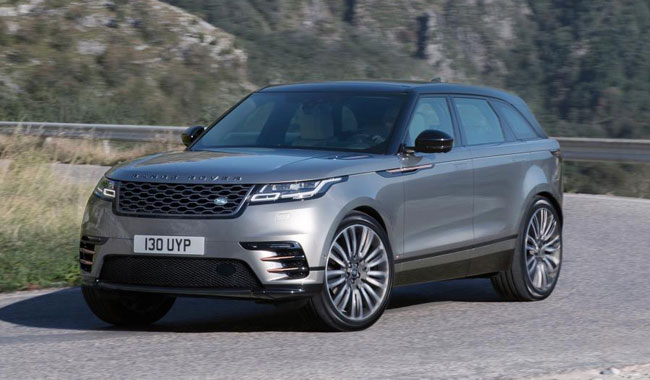 The luxury SUV was first created in 1970 when Land Rover launched the original Range Rover. Almost half a century later the specialist premium SUV manufacturer marque claims that the spirit of innovation continues with the introduction of the Velar.
It says that elegant simplicity, a visually reductive approach and pioneering consumer technology are the hallmarks of the new Range Rover Velar.
I’m sure it wasn’t an easy brief for the design team. It would be bigger and more luxurious than the Evoque but how it would it be distinguished in size and appeal from the ’Sport’, must have been a very difficult proposition.
To quote Land Rover, it believes that it has achieved its own exterior individuality due to the compelling, stand-out design features, perfectly optimised proportions, powerful, taut surfaces and a stunning silhouette. Certainly, the design is emphasised by the super-slim Matrix Laser-LED headlights and the flush deployable door handles.
This dresses a lighter, stiffer, aluminium-intensive body structure, which it claims enhances performance, agility and efficiency. The 2.87 metre wheelbase and intelligently-designed interior delivers an impressive 673-litre luggage compartment and very good space for all occupants.
Inside too, it debut of the state-of-the-art Touch Pro Duo infotainment system, featuring two high-definition 10-inch touch-screens for great functionality and intuitive operation.
The Velar offers a choice of six powertrains ranging from the clean, responsive 180 PS, 2.0-litre Ingenium diesel with CO2 emissions from 142g/km, to the potent 380PS supercharged 3.0-litre V6 petrol engine.
Towing capacity of up to 2,500kg complemented by the Advanced Tow Assist function, which allows the driver to reverses the vehicle with trailer attached using the ‘Touch Pro Duo’ rotary controller, and with no need to counter-steer.
All-wheel drive with ‘Intelligent Driveline Dynamics’ and active locking rear differential claims to ensure world-class all-terrain capability and maximum driver engagement on-road.
Land Rover also tells us that it is pioneering traction technologies including: ‘Terrain Response 2’, ‘All Terrain Progress Control’, ‘Low Traction Launch’, ‘Hill Descent Control’ and ‘Gradient Release Control’.
Air suspension is included on six-cylinder models for what Land Rover describes as peerless refinement. And ‘Adaptive Dynamics’ damping technology is standard on all models for claimed unrivalled comfort and control.
A full suite of advanced safety systems including ‘Autonomous Emergency Braking’ with pedestrian detection, ‘Reverse Traffic Detection’ and ‘Driver Condition Monitoring’ are also available on the new Velar.​
Jaguar Land Rover Ireland Sales Director, Eddie Kavanagh told us: “The new Range Rover Velar is a stunning addition to the Range Rover family and it brings increased choice to new and existing customers in a growing SUV market. It leads the way in terms of design and technology and of course Land Rover’s legendary go anywhere, do anything capability.”​