Spies Hecker, paint suppliers to the World Championship winning Silver Arrows race cars, was given unprecedented access to the team’s Paint Shop in the run up to the last race of the 2017 season.

Mercedes-AMG Petronas Motorsport may have clinched the 2017 FIA Formula OneTM World Constructors’ Championship, and Lewis Hamilton the 2017 FIA Formula OneTM World Drivers’ Championship, in October, but with one race remaining, for the Paint Shop at the Team’s headquarters in Brackley, England, it’s business as usual turning components around to meet freight deadlines.

Over the course of this season, they will have painted literally thousands of components. Some weeks, as many as 150. But they rely on Spies Hecker, one of the three global refinish brands of Axalta Coating Systems, a leading global supplier of liquid and powder coatings, to meet those challenges. The brand has been responsible for the paint on the team’s Silver Arrows race cars for more than four years. The weight, quality and durability of the paintwork are particularly important because the race cars must endure extremely tough track conditions. 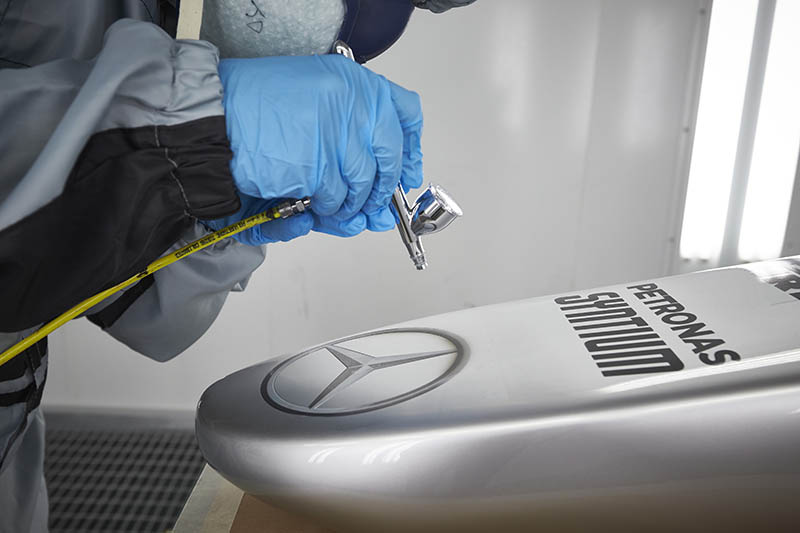 Every Tuesday, Andrew Moody, Head of Paint and Graphics at Mercedes-AMG Petronas Motorsport, starts the day off at 8.30am by chairing a team meeting. The 16-strong paint and graphics team, including the painter from the early shift who has been in since 6am, attends. They discuss the week’s schedule and what might be the likely pinch points.

Moody explains, “the weekly team meeting allows us to sit down together and run through what we need to do that week. It is a great complement to the work schedule and turnaround lists that the team leaders post every morning, which detail exactly what is coming through the Paint Shop that day, and give an overview of what is needed for the next race.”

After the meeting, the graphics team head to their side of the department and the eight painters immediately get to work in the Paint Shop. They prioritise the longer lead time components, which tend to be larger bodywork pieces such as the side pods, engine covers, noses and wings.

Today, there are two front wings first up. Moody explains, “we are very process driven. For every component that comes through the Paint Shop, there is a job element sheet that details exactly what needs to be done, and how; everything from mixing ratios to which grit paper should be used and how much to sand off.”

Before anything happens, the two front wings are weighed. They have come from another department where they have been scanned, tested and x-rayed to ensure there is no damage or wear that could affect the car at the next race. Three painters work on the two front wings together. The old paint is removed and then they’re sanded. Then, the components are primed using Spies Hecker Priomat® Wash Primer 4075. Then, either Permasolid® HS Vario Primer Surfacer 5340, a high solids primer surfacer, or Permasolid® HS Performance Surfacer 5320, a fast drying 2K HS sanding surfacer, is used.

From there, one of the front wings is painted with Permahyd® Hi-TEC Base Coat 480 in a bespoke colour Spies Hecker has developed for the Team: Stirling Silver, named after Sir Stirling Moss who drove for Mercedes-Benz in 1955. While this bakes, the second one is coated with the silver colour. Just like any bodyshop, the painters mix their own colours. Moody and his team use Spies Hecker’s Phoenix colour management software along with two intelligent head scales.

Everyone in the team is a qualified painter who is trained comprehensively for this very specific role. And because they all have to be able to jump from one job to the next, there’s a clear skills matrix, as Moody explains. “Eighty percent of the team can do all the jobs, and fifty percent of the team are able to do the speciality work, like airbrushing, so flexibility among the team is key to getting everything done. Our work schedule and turnaround lists are the foundation for the day. Things can change, so adapting and being flexible, while maintaining our focus, is essential.”

At this point, two of the painters have left the front wings to jump onto the next job. The remaining painter, one of the airbrush specialists, works on the fades of the colours and the so-called glow lines on the first front wing while the second bakes. This is the point the graphics team join the process, as they provide the required vinyl spray masks, which act as stencils. For most of the team, it’s now time to break for lunch. They usually sit and eat together, and while sometimes they may be able to break for an hour, during the busiest turnaround times, like today, it’s usually just 30 minutes.

The 2017 livery’s striking-yet-complex glow lines, stripes and spark effects run across multiple components. This intricacy means that it is essential that the airbrushed design on every interchangeable component matches up with the adjacent panels perfectly in terms of placement, size, shape, colour and shading. And to add to the complexity, Moody explains that the shape of the car is constantly changing. “Some race tracks require a high downforce set-up, others medium or low downforce, so we have to adapt to different shaped components all the time,” he says. It’s no mean feat.

The front wings then go in for a final bake before the clearcoat. The painters use Permasolid® HS Speed Clear Coat 8800 on parts they need to get done and dried quickly. When time is less of an issue, they use Permasolid® HS Optimum Plus Clear Coat 8650. Once that’s done and has dried, the front wings are flat and polished using three different grades of abrasives and polish in order to provide the stunning gloss and shine fans see on the Silver Arrows cars.

At this stage, the two front wings are unmasked and prepped to leave the Paint Shop so they can head to another part of the factory. Before any part or component leaves, however, its weight has to be recorded, and Moody himself, or the team leader, must inspect the part and approve its release.

Moody says, “there are at least 10 different paint processes that components go through in eight or nine hours. The reliability, consistency and speed of application we get with Spies Hecker is particularly vital because we don’t have time to accept anything less than perfect.”

With the front wings signed off and ready to move on, other components are still being primed or painted, or polished. The painter on the late shift, who arrived at 2pm as that day’s early shift painter was preparing to leave, takes over some of the jobs that the regular shift team will not complete by the time they leave at about 5.30pm. The late shift painter will work until 10.30pm, and then leave everything prepped and ready for the early shift painter who starts at 6am the next morning, when the whole process starts all over again.

As Moody says, watching his team work, “Formula OneTM is truly a team sport, and Spies Hecker is part of the success we have had at Mercedes-AMG Petronas Motorsport.”