The drop follows August’s inflated results, which were boosted by an increase in business registrations and stock clearances ahead of the introduction of WLTP on the 1st September. Despite August’s increase and September’s decline, volume was only down 3% between the two months, meaning the year to date figures haven’t been strongly impacted and stand at +2.3%, with 278,000 more registrations than this time last year.

September’s decline was felt across Europe, as 23 of the 27 markets analysed by JATO’s data reported double-digit drops, while only Croatia saw an increase. The main reason for this relates back to the lack of availability of many models, which were not homologated during the month under new WLTP testing procedures. JATO’s analysis of 22 markets (98% of the volume of Europe-27) found a correlation between the availability of WLTP-homologated derivatives and the variation in registration figures during September.

Felipe Munoz, JATO’s Global Analyst, comments: “This is a huge drop, but it was somewhat expected across the automotive industry. We will continue to see registrations decline so long as a large portion of the market’s versions remain unavailable under the new test conditions. The big question now is how long the drop will last, which will depend on how long it takes car makers to homologate the models they want to keep on the market.” 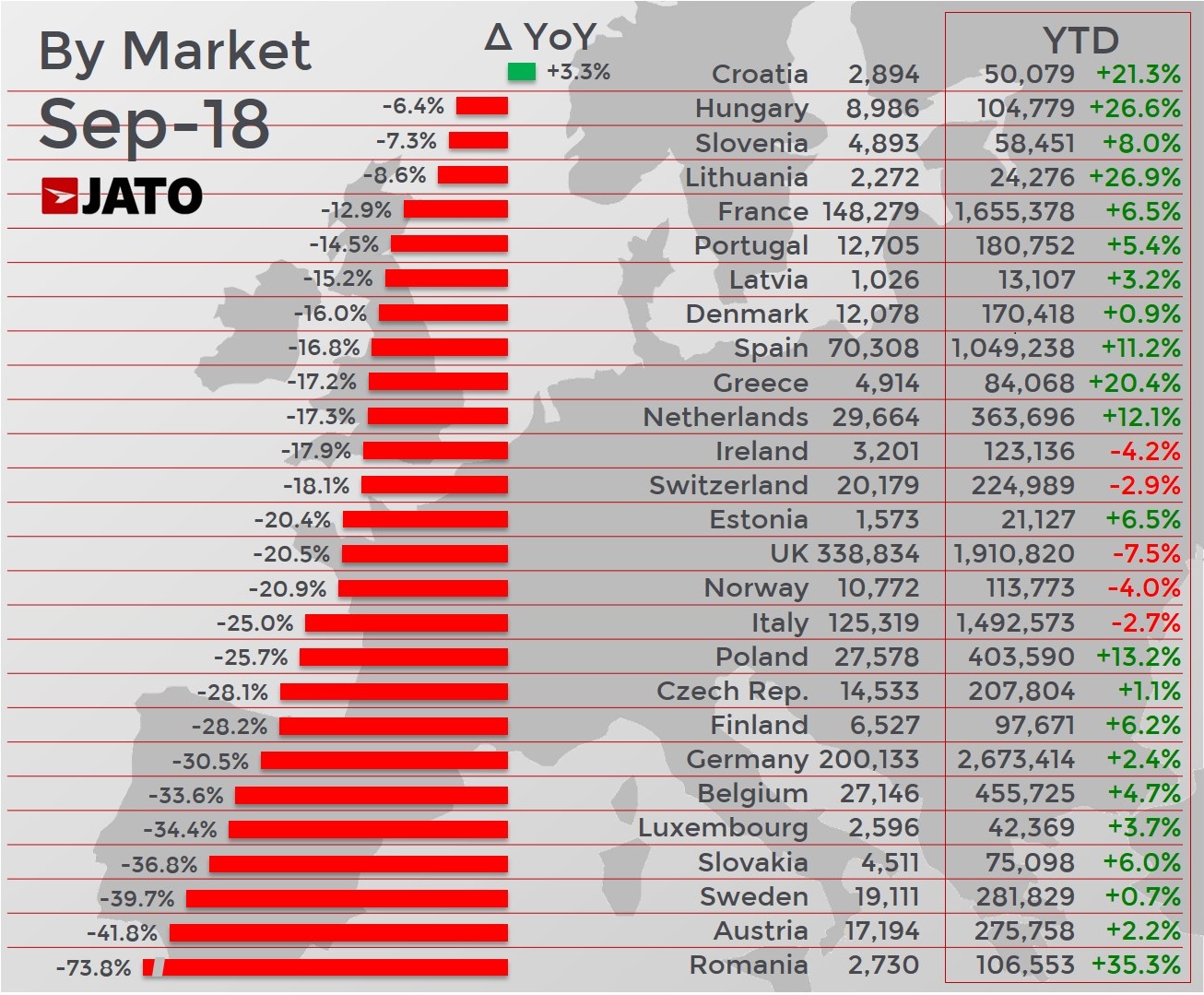 After the significant increase in business and fleet registrations in August they posted a big drop in September, with market share falling from 59% to 53%. Nevertheless, when considering the net effect of the August-September decline, it is worrying that the overall drop (-5% in Europe-21) was largely driven by private registrations, which were down by 9%.

The decline was most strongly evident with diesel cars, which recorded one of its lowest market shares ever with just 32.9% and a volume decline of 40%. In contrast, electric, hybrid and plug-in vehicles posted their highest market share to date at 7.9%, as demand for them bucked the general market trend and increased by 12.7% to 85,300 units.

Likewise, SUVs also bucked the general trend and continued to gain market share. Despite registrations falling by 10.9% to 407,500 units, their market share jumped from 31.3% in September 2017 to 36.4% in September 2018. Although WLTP is even affecting this popular segment, SUVs are better equipped to deal with the ramifications of the new testing procedure as they have more updated models than the other segments. The majority of the car makers’ latest launches – which are newer and therefore more likely to be in line with testing conditions – were in the SUV segment. On the other hand, September’s biggest losers were the MPV, midsize and compact segments.

Other market share winners included Hyundai-Kia and BMW Group, whose BMW brand was the best-selling premium brand, following a lower monthly decline at 7.4% than its rivals Mercedes, which was down by 13.7%, and Audi, which was down by 60.4%.

September was a challenging month for VW Group, as all of its brands lost market share. Most of the decline occurred in Germany, where volume was down by 61%, and it was the car maker’s compact and midsize segments that recorded the biggest drops. Other makers that also lost traction included Renault-Nissan and FCA.

The Opel/Vauxhall Corsa overtook the VW Golf to become the best-selling model in Europe. The Golf had occupied the top spot since March 2017, but it saw a huge 71% decline during September and fell 12 places to 13th place in the rankings. On the other hand, demand for the Corsa, which had been wavering during recent months, saw an increase during September, mostly in the UK, Germany and France. 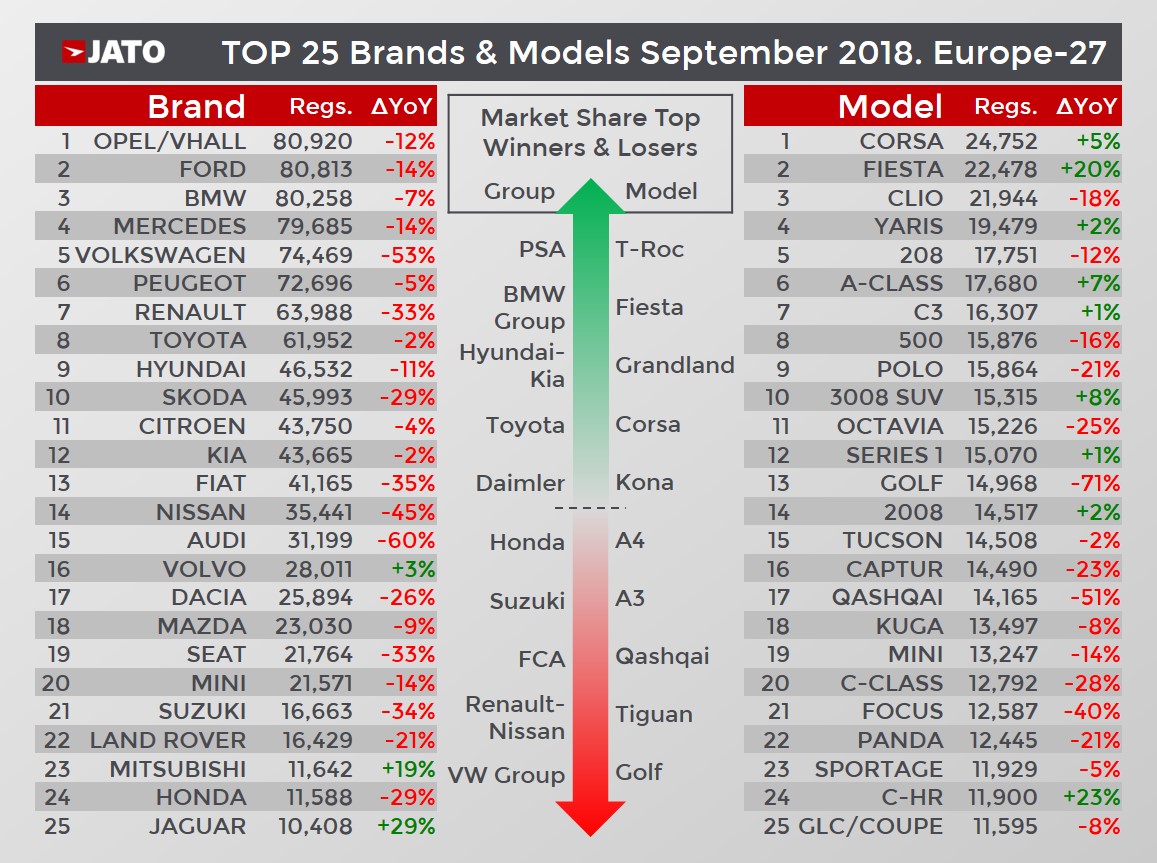 Other models that performed well included the Toyota Yaris, which moved up the rankings to 4th place, the Mercedes A-Class, which was the best-selling compact car (partly boosted by its new generation), and the Peugeot 3008, which was the top-selling SUV of the month.