Autopromotec, the international trade fair for the automotive aftermarket, takes place in Bologna, Italy, next year, May 22-26.

Autopromotec is held every second year in Bologna, Italy and is one of the top specialised international trade shows for automotive equipment and aftermarket products. Sectors include quality spare parts, tyres and accessories, garage equipment and tooling, body and repair products, car wash equipment and diagnostics.

Each of the many halls and outdoor areas is focused to one product sector, making the show easier for visitors to navigate.

Autopromotec 2011 was the largest ever, with the show attracting a record 1,473 international exhibitors, offering 150,000 sq m of exhibits across 16 halls and outdoor areas.

A record total of 103,666 visitors attended Autopromotec 2011 across five days, including 18,524 aftermarket professionals from other countries – up 11per cent on the preceding 2009 show.

Organisers staged a busy schedule of expert-led forums and seminars under the banner of AutopromotecEdu, which offered a valuable insight into some of the key trends and opportunities facing the industry across Europe. 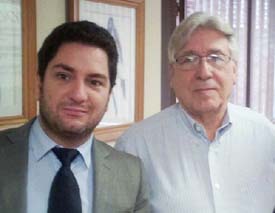 Emanuele Vicentini of Autopromotec promoting the 2013 exhibition with Ademar Queiroz do Valle, Diretor of SINDIBOR, a strong association for the tyre industry in Brazil.

Promoting Autopromotec in Argentina and Brazil

Autopromotec has been focussing on increasing awareness of the show internationally and organised a recent South American promotional mission to Argentina and Brazil.

In recent shows the organisers of Autopromotec, Promotec, have been actively targeting international companies with the objective of not only increasing participation of new exhibitors and visitors from outside Italy, but also of adding value to the event itself. The results of this approach have resulted in 9 per cent more exhibitors attending the show in 2011 than in 2009, and 11 per cent more visitors attending from abroad.

The recent trip to South America enabled Promotec management to meet key players in the automotive industry at a local level – from the chief industry associations and trade fair organisers to marketing agencies and representatives from industry press. The strategy is helping to make Autopromotec and the entire Italian automotive aftermarket become better known across the world.

The mission took place recently and was hailed a great success. Brand Manager at Autopromotec, Emanuele Vicentini, said: “The outcome of the mission has been more than positive, further strengthening awareness of the event in South America, as well as providing interesting information for our future relationships with businesses, developing specific initiatives and targeting exhibitors and visitors from both Argentina and Brazil.”